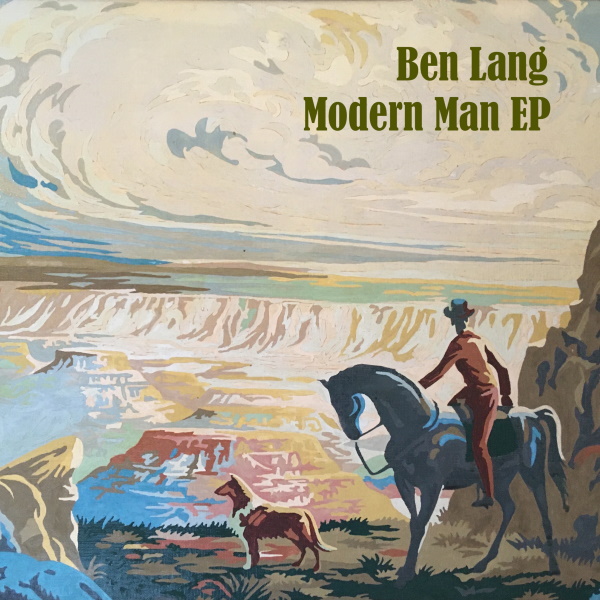 Singer songwriter Ben Lang is originally from the southeast Texas town of Port Arthur, was raised in the San Francisco Bay Area and now resides close by in San Rafael, California.

He was a founding member of the San Francisco cult classic band Biv and the Mnemonics with friend Dan Paggi. He has performed in other bands over the years including Azalea Drive, Moblad, and The Devil’s Chord, has released a couple of albums “The Blue Orange” and “The Pace” and now performs every Friday at the Le Chalet Basque restaurant in San Rafael.

This extended play opens with `Houston-New Orleans` with a hypnotic bass line, nice harmonies, kick drum and some maracas being shaken in the background. A wonderfully melodic number that put me in mind of Johnathan Richman. Title track `Modern Man` has a more laid-back feel as it sort of shuffles along seemingly relating to doing what`s expected, to be their partner`s modern man, like being considerate.

`Nailin` It` has some intricate picked guitar chords on this mellow offering which gains a fuller sound half way through, seemingly about being ready for an opportunity that`s due as reiterated in the line “ I’ve been waiting for all my life, hope this chance don’t pass me by.”  I felt that `Hollow Spaces` had a real Donovan `Jennifer Juniper` vibe about it. Although Ben`s song isn`t about a muse.

`Tee Off With Your Head` is an uplifting, quite fast paced country tinged melodic composition where I wasn`t really sure what it was about, possibly drinking or relaxing socially but enjoyable, nevertheless. We have a short song to close out with `Mr Moon` a throwaway ditty opening with finger clicks then a strummed guitar. An ode to the moon or a child`s nursery rhyme. i`m not sure.

“Modern Man” offers a real flavour of what Ben is about with half a dozen, self-written, folk, and country tinged alternative-acoustic tracks. He`s an accomplished musician with a delightful vocal range. If you`re ever in San Rafael, California on a Friday evening, you know where to go.