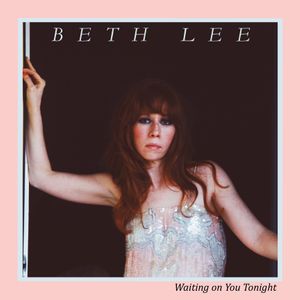 It`s been four years since the release of Beth Lee`s album “Keep Your Mouth Shut” with her roots rock ‘n’ roll band Beth Lee & The Breakups. Her new album “Waiting On You Tonight” showcases some of her diverse influences, from nineties love of Mazzy star`s Hope Sandoval, to the pop-friendly melodies of sixties girl groups, the southern soul of Stax Records, and the originality of contemporary Americana artist Nicole Atkins. Beth heads up the vocals and guitar and is aided by Vicente Rodriguez (Chuck Prophet) on drums, percussion, bass, background vocals, who also produced the record, James DePrato (Chuck Prophet) on guitar, bass, glockenspiel, background vocals and Julie Wolf (Ani DiFranco) on organ and melodica.

The inspiration for many of the songs come from to her struggles in a long-term relationship.

The album opens with `Waiting on You Tonight` with a fuzzy resonating guitar, a repetitive drum beat and the singer`s sultry vocals. The song was originally intended as a slow waltz, but after Lee and Rodriguez played around on an acoustic the night before they went in the studio, they came out with an edgy rock tune. The song relates a cautionary tale of waiting for a lover who more than likely won`t show. There`s a wonderful Americana feel to `Yale St and 45` a number relating to trying to get back to somebody living at this location in Houston, Texas. Beth`s vocals are allowed to shine amongst the enthralling platform created by the experienced musicians. I really loved the way the organ floated in and out at just the right time.

`Playin` Along` has a dreamy feel about it. It retains an overall country vibe but does have a retro melodic feel. The addition of a melodica complemented the guitar solo in the latter part of the track. A delightfully mesmerising composition. Again, there were some cracking guitar chords and riffs throughout `I Won`t Give In` a defiant message shared by a vocal that sounded charmingly alluring but determined.

`Birthday Song` was delivered in such a captivating manner that made the narrator seem unapproachable or unobtainable. A bit of a strange one to describe but could have blended in with the best tunes from a surreal series like Twin Peaks. A sort of virtually period piece that had some curious haunting steel guitar and hand claps. There`s a faster almost punk pop feel about `Pens and Needles` which just seems to let rip. A no nonsense enjoyable offering with harmonies, hand claps and guitar grooves.

“Four-Letter Name” is a laid-back slow burn where Beth`s vocals are wonderfully irresistible, I felt drawn to this track like a moth to a flame. We enjoy a quite soulful bluesy swagger with `Understand Me” with echoing quite detached guitar textures, swirling organ and seductive vocal inclinations that stop and start on route along this provocative tale.

“It Was Enough” did sound like a nod to the late fifties rock ‘n’ roll era of `you done me wrong` songs, heading towards being doo wop and even has a spoken word section towards the end of the number. There`s a simmering undercurrent to `Too Little Too Late` where the vocals seem quite restrained as if waiting to explode. We have some riveting guitar chord riffs, swirling organ, rolling drums and catchy backing vocals on this almost disquieting submission.

The album closes with `All The Way` which is a quietly shared melancholic slice of downbeat Americana, a slightly perturbing piece to end on.

There was a fair array of styles and tempos on “Waiting On You Tonight” and Beth has surrounded herself with some seasoned musicians to help bring out the best of her rich and varied vocal range. This lady has been described as purveying some soulful Americana, blues, and roots rock ‘n’ roll and we got a taste of all and more. Her social media outlet describes her as Country-fried rock ‘n’ soul and that really sums it up much better than I could.