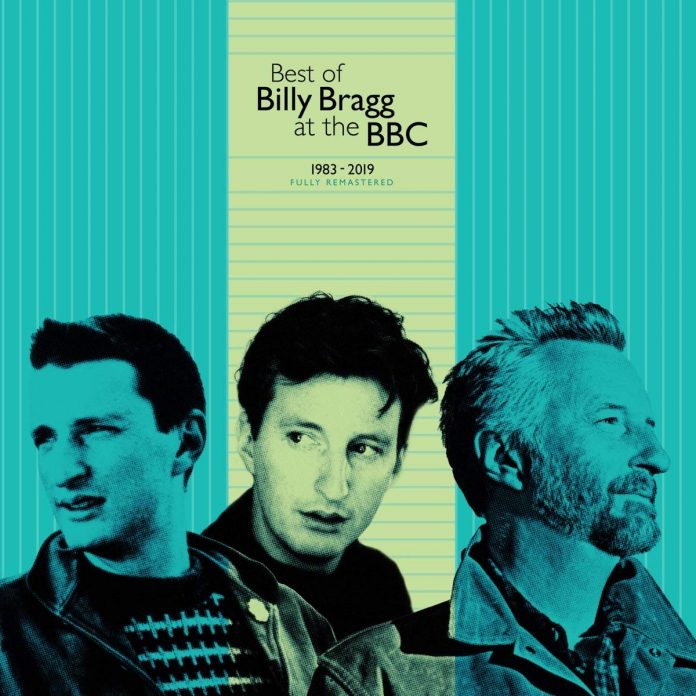 I saw a Tweet the other night which said: “The world may well be going to the fucking dogs but Billy Bragg is on BBC4 talking about skiffle. We need this kind of energy and unity today.”

You can’t argue with any of that, really.

Bragg has played a huge part in my life. Ever since I was a kid growing up in Thatcher’s 80s, listening to John Peel on the Radio my Gran bought for me. That’s why this collection has got me in such a reverie.

38 songs, almost two hours of Bragg’s sessions on BBC Radio – the same BBC that allowed that racist piece of shit on Question Time last week a platform for her views is still a wonderful thing when it gets it right.

And I can remember being about nine years old and listening to one of these. Whether it is the first time it was played I couldn’t tell you, what I do know is I remember listening to “A 13, Trunk Road To The Sea” and thinking “I have never heard anything like that before, I dunno if I like it.”, then he played “A New England” and I am lying in bed thinking “ooh he’s playing Kirsty McColl now, I like this.” (I know now, alright).

One of my mates at school at the time had an older brother. He was to come in handy a few years later when he handed me an LP and said “you might like this…” It was “Appetite For Destruction”, but I digress. On this particular occasion he had some Billy Bragg records. A love that persists to this day was born.

I’ve seen Billy (first name because he feels like a mate the amount of times I’ve turned to his music) countless times since. He got me out of the Christmas do at work in 1999 because he played a gig in Coventry that night, we were there in 2006 when he played “Life’s A Riot With Spy Vs Spy” in full in the encore in Wolverhampton (I think West Ham had just got to the cup final that day and he was celebrating?), and I saw him just before Christmas last year when he celebrated his career with a series of shows in each city.

But I never saw him when he was a young firebrand. Which is why I started this with the “Skiffle” tweet. Bragg is now the Bard Of Barking, the author, the activist, the occasional songwriter. Which is why this matters so much, which is why he matters so much. Right at the end of the end of this, the last four songs are from a BBC 6 Music thing from 2017, and he plays “Why We The Build The Wall”, it’s a cover – by Anaïs Mitchell originally – but it is perfect. The perfect condemnation of the type of bullshit that vile Tommy Robinson spouting halfwit on QT last week (sue me if you see this Madam, I’d be thrilled) but that and “I Ain’t Got No Home” – a heart-wrenching take on Woody Guthrie’s track – sum up the sheer beauty and scope of this work.

It all starts with “A New England” 37 years ago, and self-evidently, he’s not 21 years old anymore. That’s the point. Has there, outside of Springsteen and maybe Dylan (albeit I prefer Bragg to the latter, and probably listen to him more than the former in honesty) been an artist that has managed to remain so relevant for this long, reinventing himself too.

Because “Between The Wars”, “Day’s Like These” or “The Few” and tell me that that isn’t exactly where we are in 2020?

The thing is though, for all the “Red Wedge” stuff – and my oldest friend on the planet votes Tory, we don’t talk about it – you cannot overlook the gorgeous way Bragg deals with love and loss. “Man In The Iron Mask”? Yeah that one got me through 1993. “The Saturday Boy”? “A Lover Sings” and “The Short Answer”? Still to this day I wonder “how did dad meet mum, and how did they conceive of me” just like the character in the song. Then there’s “Tank Park Salute” and I am telling you now, there isn’t a Billy Bragg fan on this planet that didn’t listen to that the day they lost a parent. I did. I am not too proud to admit I cried, either.

He is one of the greatest chroniclers of the human condition to ever sing songs – perhaps the best ever from England – and this brilliant thing proves it.

So to paraphrase, I was nine years old when I heard some of these songs. I’m 44 now and Billy Bragg is still a hero. Vote empathy.