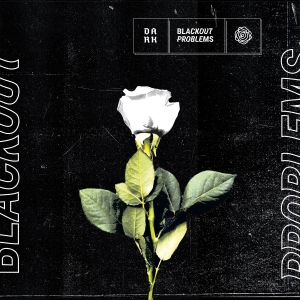 Blackout Problems are an alternative rock band from Munich, Bavaria, Germany founded in 2012 and comprise of Mario Radetzky (vocals, guitar), Marcus Schwarzbach (vocals, bass), Michael Dreilich (drums) and Moritz Hammrich (vocals, guitar). They have released two albums “Holy” in 2016 and “KAOS” in 2018 and have a new album “DARK” due this week. The album reflects the band`s response to some recent world issues including the resurgence of right-wing forces.

The album opens with `Murderer` and the first thing that strkes you is the raw and emotive lyrics referring to the rise of the far right and as this submission progresses the band`s call to arms to prevent this with Respect and Love. The impact is more telling as the vocals are hollered against a quite intense repetitive drum beat. The response or challenge to the situation is shared with a much more restrained almost peaceful pleading vocal and melodic musical arrangement. The faster paced guitar-driven `Brother` reflects how relationships change as you grow older. How you can grow up with someone who you`d call a brother and grow apart from them.

`Germany, Germany` lyrically is remarkably interesting partially addressing growing up in a country that still has issues relating to a war and its consequences seventy-five years on and how recent immigration is affecting the nation. It has some electronic textures, begins quietly before building to a much more rock crescendo. There seems to be a real mix of styles with `Darling` which at times is quite cinematic, anthemic and a little dreamy. A song possibly about a soured relationship or maybe a metaphor for the lost love of the city you grew up in.

`House On Fire` is a slower more reflective number with electronic beats and melodic backing vocals supporting the main narration of as the band share “a journey of identity and self-acceptance”. We have a straight up rock number with `Dark` which questions the harmful nature that humankind perpetrates on itself and the world and whether we have the ability to change that. In the last minute it takes a slight curve and slows completely down and has some idiosyncratic harmonies backing the lead vocal.

`Lady Earth` is the band`s eco anthem written around the need of change to save the planet. It peaks and flows from gently flowing synth swatches to a much more vigorously powerful guitar-driven thumping beseeching arrangement.  I felt `Drive By` leaned more toward the art rock type of sound Muse have seemed to favour these days with its stop start nature, crashing guitars and distorted vocals.

`Lovers` has a constant rhythmic beat with vocals almost roared at times but has some grandiose over blown sections and some interesting female vocals supplied by Leoni Klinger. An offbeat love song of sorts. The poppy `Seven` was a bit too saccharine for my tastes but i`m sure it`ll appeal to many. It did have an enjoyable quirky synth section midway through.

`Fireman` is a composition that builds musically and has a pulsating beat throughout, seemingly relating to somebody who maybe didn`t reach the potential that they were capable of in life. The penultimate offering `Heaven` is a quietly offered mournful poetic number not a ballad but certainly heading that way. It would seem to relate to someone who seems a little detached having been hurt maybe emotionally and possibly romantically.

The album closes with `Ghost` a quite combative track with roaring vocals shared over a driving, palpitating pounding drumbeat and oscillating synths. It does have its quiet moments part way through and in the last minute as it comes to a resolution.

Blackout Problems have described their music as Dark Pop which is probably a fair description. There was much to enjoy here with “Dark” and the first section of numbers on the album were quite challenging lyrically, but it seemed to slightly lose its way in the latter part. It`s the sort of album though that will come to light in a live situation and hopefully that won`t be too long in coming.