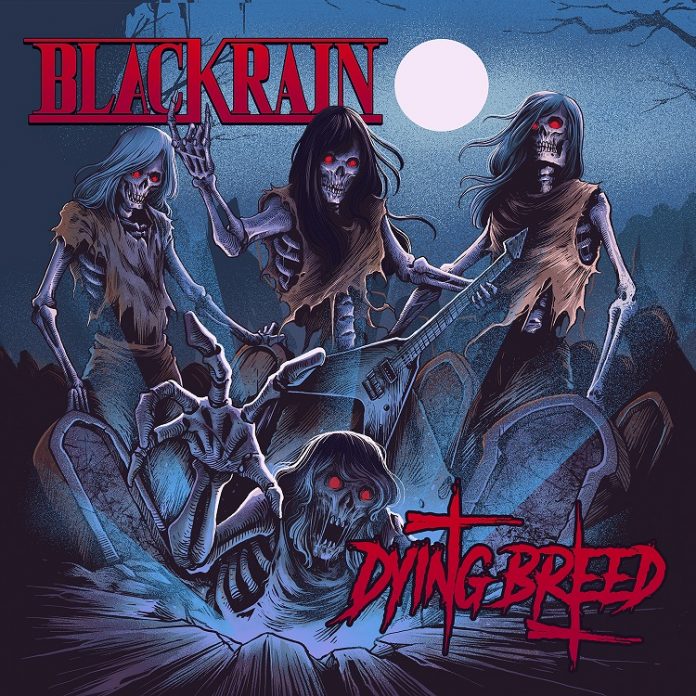 Blackrain frontman Swan Hellion poses a simple question in the title track here: “What the hell,” he asks, “happened to you folks?”

For the last 13 years since they released their debut record, to this one, their sixth, Blackrain, have been holed up in the Alps (albeit Hellion now lives in Sweden) asking that question.

Blackrain, you see, would very much like there to be a glam rock revival. They’d like it to be 1986 again, and Poison have just released their first record, and everyone is a rock star.

You can always tell in the solo’s with a band like this. The one on “….Breed” is absolutely sleazy. The opening riff to the next song “Hellfire” lays its cards even more firmly and stridently. Pure Mick Marrs. It does Motley really well, at least it does until the chorus, which couldn’t be more AC/DC if it tried.

Look at the bands I have named here: Poison, Motley Crue and AC/DC. And that kind of presents the problem: Blackrain are trying to revive something that is very much alive.

That’s not to say they aren’t good at it – on the contrary. The Skid Row-ish strains of “Blast Me Up” are perfect for one of those early afternoon festival slots, that would have you texting your mates going: “I’ve seen a band you’d like here…..” and the chorus here is a cracker.

Just occasionally they inject something new into the mix. “Nobody Can Change” happily builds itself on a bass rumble from Matthieu de la Roche and there is an industrial sheen to the stomp here as guitarist Max 2 enjoys himself.

But look at the lyrics again: “I wasn’t born to follow the rules” is its first line, but the question of what needs rebelling against is unclear.

“Like Me” – right in the middle – is the best of the lot. Grooves are mighty. The brooding is real, “do you like me?” is it’s simple cry, and this seeking acceptance is perhaps the most honest thing there is about “Dying Breed”.

“All The Angels Have Gone” feels like a box ticking exercise – all these types of bands needed a ballad, after all – while “We Are The Mayhem” comes over as more authentically them, if you like. A soundtrack to some debauchery that they probably fantasise about.

“Rock Radio” is an interesting diversion too. Part power metal, with a taste of Crashdiet (with whom they share a producer in Chris Laney) about it, there is something OTT and the record a whole benefits

It is certainly better, in honesty than “Public Enemy” (they are, apparently) but “Call From The Inside” does the Euro hard rock thing quite nicely to finish this off.

Blackrain have flirted with stardom. A couple of records produced by Jack Douglas – Aerosmith – earlier in their career, and some high profile festival slots, support tours and all the rest. In all candour, “Dying Breed” is unlikely to move them into the top divisions. It has some commendable moments, and its polished and true to their beliefs, but it is neither original enough, nor a good enough copy, to stand out.