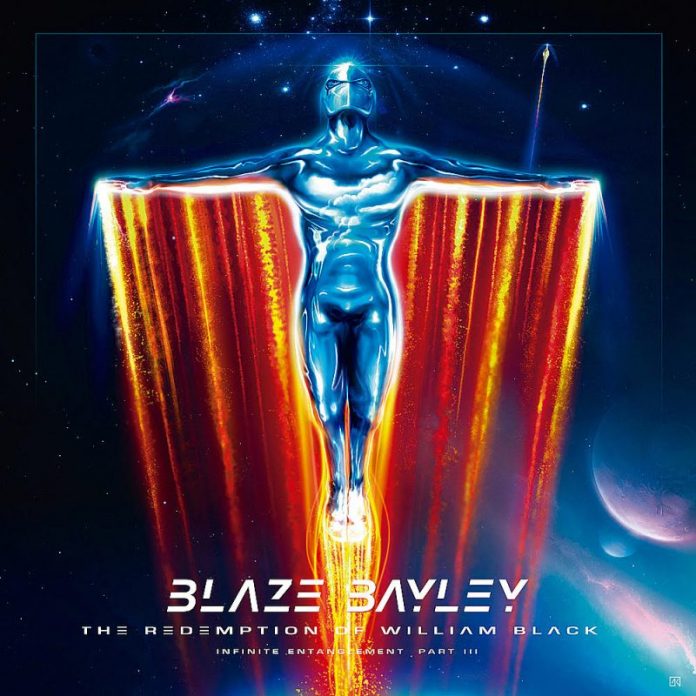 And now, the end is near, and so we face the final curtain. Or something similar anyway, given that “The Redemption Of William Black” sees the end to the “Infinite Entanglement” trilogy. Three albums in three years that seem to have given the redoubtable Blaze Bayley his spark back.

The first track here is called “Redeemer” and it is not too much to say that with its spoken word parts, the way it builds and the brilliant solo played by Chris Appleton of Absolva (who in effect are Blaze’s band for these endeavours) it is everything that has ever made British Heavy Metal great. Furthermore, it is probably not too trite to suggest either that Bayley himself – never mind the central character in these songs – has found redemption in such an ambitious project.

Because, if some of his work after the stunning “Man Who Would Not Die” record seemed a little lacklustre by comparison, then that hasn’t been the case with anything in the last couple, nor is it here.

“Are You Here” is a simple metal gallop, while “Immortal One” is particularly interesting, because in many ways it encapsulates all that Bayley gets just right. It has an epic feel, but it is only just over three minutes long, and there is nothing forced about it. That is just natural at this stage, and ten albums in he’s entitled to a trademark delivery, which is right to the fore here.

The eerie chanting at the start of “The First True Sign” seems to highlight the ambition the album contains, but also the chug of its music merely reinforces just how expertly this is played throughout. Nowhere, perhaps, is this better shown than on “Human Eyes”, which you could say was acoustic, except for the very crucial fact that Bayley couldn’t do stripped down if he tried, and all credit to him.

Chris Jericho, no less, appears for the spoken word bits on “Prayers Of Light” and its fists in the air glee captures the testosterone fuelled zeitgeist perfectly.

And if “18 Days”, which features superb harmony vocals from Liz Owen sounds very much like it should be on an Iron Maiden record (you kind of have to mention Eddie and the boys on a Blaze review, and it isn’t something he shies away from either given his sound), then it is still expertly done.

There is a foray into out and out hard rock for “Already Won” and “Life Goes On” sees Bayley articulate the despair of the character exquisitely, indeed, there are echoes of Geoff Tate in the way he plays the part with aplomb, and “Dark Side Of Black”, takes on an almost thrash element with its double kick drumming.

The record – and thus the trilogy – ends with the mighty epic of “Eagle Spirit”. Over nine minutes of class and quality and the way it builds, shows just how much of a labour of love this has been for Blaze and the band.

A fantastic three records, you can pay them no higher compliment than this: if they were standalone albums, they’d all be brilliant, but the story, the theme, the character building take them to another level. This is a fine way to end it. And he did it his way.