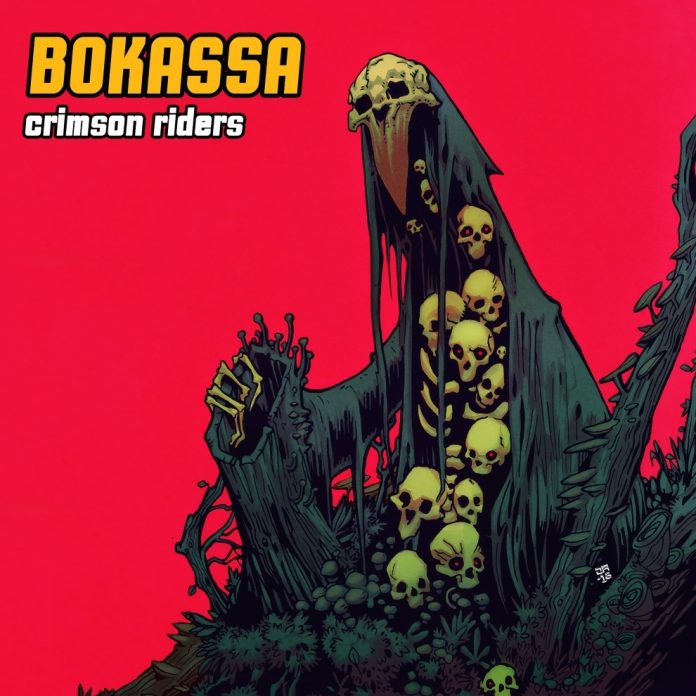 Bands that meld different sounds and don’t give a monkey’s if they’re “supposed” to go together or not. Amongst the many things I’ve always loved about music, that is right up there.

So this kinda stuff, when I read it, had me intrigued. “We just really wanted to create hooky songs that people could sing along to,” reckons Jørn Kaarstad, who is the frontman for Bokassa. “We let the melodies shine out. It’s still all of the same crazy shit, but we go to the next level.”

For many people, the entry point to Bokassa was Lars Ulrich declaring that the Norwegians were his “favourite thing in the world” (to be fair, he’s backed it up by inviting them on Metallica’s tour). But as cool as that is, it neglects the fact that Lars says that sort of thing about as much as me (I declare such a thing about five times a week on this very site, and I totally understand being excitable about things you love), but it’s always worth stripping away the hyperbole.

In this particular case, though, it’s better to be taking the boy Ulrich seriously. “Crimson Riders” rules. It is also worth re-reading the words of Kaarstad too, though, because as much as this rules, it is also absolutely batshit crazy.

Tellingly, it beings with an instrumental, which amounts to a big, thick riff. The important bit is the title: “Brologue” and this is more, to be fair, than just a play on words. The whole of “Crimson Riders” is very much testosterone fuelled and most of it sounds like its up for a scrap, with anyone and everything.

From Beavis And Butthead to Limp Bizkit, there is a strand of rock n roll that just basically has the primal urge to well….break stuff….and that’s all over “Charmed & Extremely Treacherous”. Three minutes of punk n roll which offers as a hook line: “destruction is back again, destruction my only friend.” It doesn’t care, and it picks its targets, and with Kaarstad effectively growling at you, you think you’ve got them pegged.

And you haven’t because they aren’t interested in “rules”. So they follow “….Dangerous” up with “Vultures”, and this is the one, the one you’re going to remember when you walk out of the stadium Metallica are in. Fuzzy catchiness that would make Josh Homme wish that QOTSA had thought of it first. The thing is, though, they wouldn’t have thought to have a sax solo in. Bokassa have.

So by now you kinda know that all bets are off. “Mouthbreathers Inc” manages to sound angrier than thrash, but deals in pop harmonies that go on about “waiting for the Gods to fix it up” what, I am not sure. It doesn’t matter. It’s in your head, that’s all that counts.

Now, to give you a flavour of how weird all this can be – and without meaning to bore anyone – when I review records I make notes on each song. On “Wrath Is Love”, these were my bullet points: Thrash with a whoah, whoah. Punk. Gaslight Anthem with a metal riff?” and yes, I know. But listen to the thing. It’ll make sense. There’s no way it should have, but it will.

The title track is about as metal as walking around with an Iron Maiden patch on your studded denim jacket, but almost as if they’ve realised that was a bit straight up and all that, “Captain Cold One” begins with the almost genius thought that: “I survive on bear fucking minimum. I survive on Nickelback and Trivium.” Now I like one of those bands – hint: it’s not the cool one….. – but I don’t know much about Pink, who also gets a shout out. Oh and this could get straight in any moshpit with Machine Head, and it does all this inside the first 15 seconds.

We are not dealing with a normal band here. The first line on “Blunt force Karma” simply suggests, loudly – but then all of this is done at the top of voices – that “I am the greatest man alive” sorted. No one should argue.

Even by the standards of what has gone before, it feels like “Immortal Space Pirate 2” is the one where they’ve really let themselves go. Gothic, a bit pompous, and even a bit of icy cold black metal, it’s all here – and you’ve given up being surprised.

Occasionally you hear records and you think: I don’t understand that, but at the same time, you know you simply have to listen to it again. That’s the only thing you can say about “Crimson Riders” for sure. Other than it is brilliant.