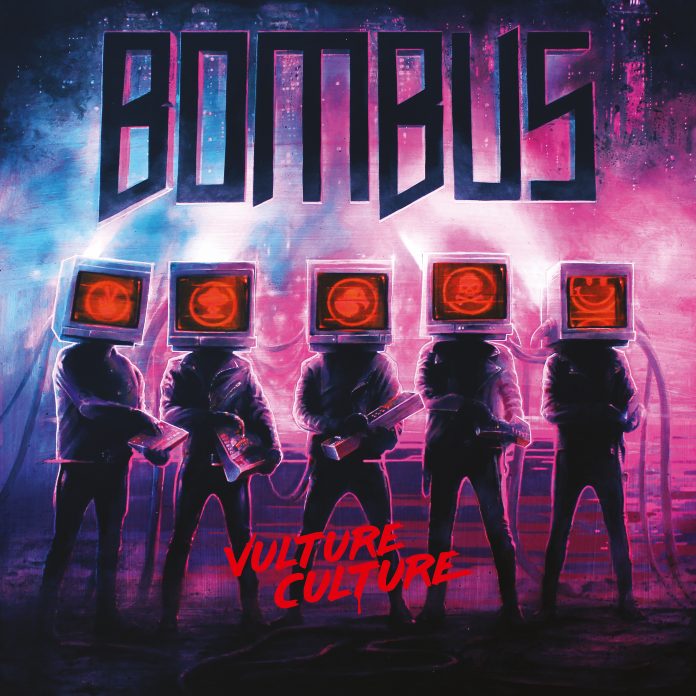 It is my duty, I feel, to entertain as well as inform, so I am going to give you the finest word I think I have ever seen.

It means – according to what I am reading – “creative flair” in Swedish. To be honest, that’s job done today because nothing will better this news.

The reason for using the word in a review of a metal record? I am glad you asked.

Fredrik ‘Feffe’ Berglund used it when talking about the influence of producer Daniel Johansson on “Vulture Culture”, but he could – in truth – have been referring to the band too.

Just a look at the history of Bombus tells you of their evolution. 10 years ago they were a two piece, playing noisy, primal rock n roll, now there’s five of them (a second guitarist in Simon Solomon has been added for this nine track collection) and whilst they might be unrecognisable from their roots at the end of the last decade, everything they’ve done in honesty, sounds natural.

They’ve toured with bands as diverse as Gojira and Graveyard (I saw them with the latter) and you can bet, actually, they’d have fitted in with whoever else they played with too.

They’d have fitted in because, a little like Bokassa, they sound like everything and nothing all at once.

Take the opener here “A Ladder – Not A Shovel”, at times it sounds like there are about five songs all competing for supremacy. The drums of Peter are rattling away like a thrash band, the lush guitar is almost prog and there’s a screeching solo. Plus the lyrics: “what’s the point, if the point is blunt?” spits Feffe, and that’s before the massive soundscape of a closer.

Bombus get called a “metal” band, and first of all you think, “ahhh yeah but that’s only cos there’s no box for them” and then they play “(You Are All Just) Human Beings” which is, well, a metal song.

“Mama” though, isn’t. And in typical style I have listened to it many, many times and I don’t actually know what it is. To be honest, if I had to sum it all up in one word it’d be this one: unsettling.

“It’s All Over” basically goes full on Devin Townsend on us, gentle to start with, but you know that if you strip away the layers, you’ll find something – and the hook line, the way the guitar explodes – that’s arena ready, but the words, this time, the cheery Queen-esque harmonies: “hate yourself, you hate yourself” are a window into some other world.

But the beauty, the sheer downright glory of this record is this: if you want to headbang to it, you can. “In The Shadows” essentially shows all power metal bands how they should do it, and “We Lost A Lot Of Blood Today” is as grandiose as you like. Cinematic, almost, but there’s something in the throaty roar of Feffe that suggests the raw two piece still beats in him.

The title track sounds nearly sleazy, but this is a nightmare made flesh “you see your mother lie, in a pool of blood this time” is a stark jolt, so as much as this is a party according to the band, its one I’d avoid at all costs.

A curious thing about it is that for all the songs sound huge, they are not particularly long. “Two Wolves One Sheep” seems to go through all kinds of confusion inside four minutes and “Feeling Is Believing” might be a little more hard rock but honestly, it still sounds original.

And originality, actually is all over “Vulture Culture”. Everyone could pick over the bones and find a different flavour. Bombus reckon they’ve made it anthemic, and that’s a good word for it, but they are anthems very much on their own terms.

It’s all down to the Fingerspitzengefühl.