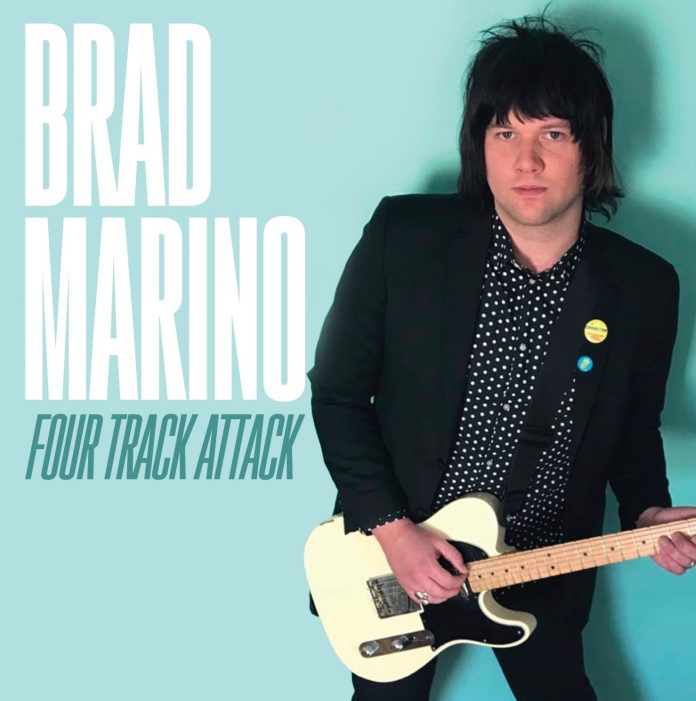 Very early last year I reviewed a covers album by New Hampshire’s exponents of joyous sound, The Connection, and suggested that it was “a record that is nigh on impossible to listen to without a stupid smile on your face.”

Well, “Four Track Attack” is the debut solo release from their singer and Brad Marino is clearly gifted with the ability to write tunes that capture the very essence of rock n roll.

I always get nostalgic on these four track EP’s. Before the internet ruined music (and yeah, I am aware of the irony of a music website saying that) I’d spend mid-90s lunch times rummaging around in record shops near my first two jobs. Often buying singles and EP’s by bands I’d never heard of just because I liked the artwork, and often finding music I loved in the process.

And back then, I would have loved to find this one and would have treasured it still.

A lot of the same things are in place. Marino, on the cover, looks like a throwback and wonderfully, for the entire duration of the 11 and a half minutes these sounds take, it is as if he’s absolutely no knowledge of the last couple of decades at all.

Lead track “Should’ve Known” is the best break up song for years. “Are you shacked up with some drunk loser” asks Marino. “I’m done being played for a fool.” That he does this over music that is equal parts The Ramones and The Stones, before a guitar solo that Warner E. Hodges of Homemade Sin would be proud of, is all you need to know.

The rest don’t stray too far from that path, either. “Hey Girl” – possibly the first song this century to use the phrase “catting around” – is perhaps more into Georgia Satellites territory, but has the same sugar sweet harmonies (and might be about the same girl in “…Known”, you’d have to ask Brad.)

“On The Brink” is more punk, but its punk like The Ramones and the solo’s belong at the dawn of rock n roll, as does “Special Friend” but equally could only have come from someone who is totally steeped in the music he plays and just wanted to write a Chuck Berry boogie. Job done, then.

A quite wonderful EP, something that belongs to the past maybe, but also with an honesty that is impossible to fake. Get on this attack, its worth it.