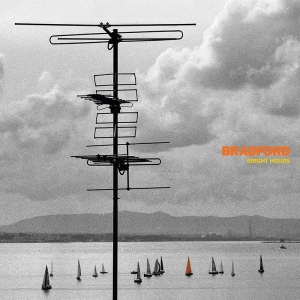 Bradford were an indie band from Blackburn, Lancashire, England. The band is best known for being liked by Morrissey, who proclaimed them heirs to the Smiths throne. They shone brightly for a couple of years then with the onset of the Madchester scene faded out of view. They return with their first original music in over three decades, featuring founding members Ian H. (Ian Michael Hodgson) on vocals and Ewan Butler on guitar. The reunion also sees the band welcome acclaimed producer Stephen Street (who produced their 1989 debut album ‘Shouting Quietly’) as an official full-time member. The reformed outfit`s material features songs dating back as far as thirty years ago to those written more recently.

The album opens with `Like Water` which grows quietly with pounding drums as it expands into a delightfully dreamy almost profound expression on life that can only come with age. The line of “like water poured onto the ground, like water, everybody`s life runs out” is wonderfully telling. A deeply moving life reflection and such a robust track to return on. I felt there was a real swagger to `Down Faced Doll` with its slightly angular, off kilter acoustic guitar riffs and heartbeat of a drumbeat throughout. An almost anthemic sing along where the lyrics are shared in a quite challenging but not hostile manner. An echo on the reflecting twists of fate and how we end up where we are. The addition of children relating a nursery rhyme at the end was truly captivating.

`The Weightiness Of The Pointlessness` is a genius title and a really interesting offering. Another reflective piece that had such a maturity about it. It`s quite stripped back with piano, banjo, shook tambourine, some percussion and Ian`s aching vocal delivery. A marvellously thoughtful and contemplative outlook. We have a real foot stomper with `My Wet Face` which is a little shouty at times but had a sort of angst-ridden Elvis Costello twang or pain in Ian`s vocal pitch. The band have related that its “An upbeat song dealing with a ‘downbeat’ subject – the essential existential dilemma that absolutely nothing material can be held onto in any meaningful way”.

`Present Day Array` was a bit of a curve ball with a melodica leading us into this dub reggae-tinged composition. There is a cracking bass line throughout and occasional keyboard inflections and chugging guitar chords. Ian even offers up a slight toast midway through the piece. Augustus Pablo eat your heart out. Another shrewdly named track `This Week Has Made Me Weak` sets out the week a day at a time with a slight inflection in the voice with piano key structures, strummed guitar and finger clicks, a throwaway enjoyable earworm of a number.

To me title track `Bright Hours` with its jangly guitars and quite vast, expansive feel had a sort of Morrissey texture about it. Another of their submissions that he could possibly cover. There was quite a melancholic edge to `The Rowing Boat Song` with finger slapped percussion, piano, organ, guitar twangs, forlorn melodica tinges and vocals that have a dreamy despondency about them.

`Feathers In The Fire` has a breezy folky feel with strummed acoustic guitar, occasional piano, backing melodies and shuffling drums, a stirring, rousing arrangement. Is `Gave A Time` a love song? I think so. A reminiscence of a fledgling romance in more adolescent times possibly.

A gentle piece with yearning vocals that really soar in and above a melodious platform. A look back on longed for more innocent times.

`I Made A Fist` begins with a snippet of what sounds like a school assembly before a guitar twang breaks it up and launches us into a sober nod and acceptance of the past but with very much an eye on the future and what`s to come. An acknowledgement that what happened three decades ago was a foundation, a beginning and here that journey continues. A thoughtful musing. The album closes out with `Like Water (Reprise)` which sounds akin to a demo version of the finished article.

`Bright Hours` is a mature, well-constructed, considered look back and more relevant a view to what`s to come. It’s not quite in the form of the quote “He who forgets the past is doomed to repeat it” but there is certainly an acceptance of it and how it shaped them.