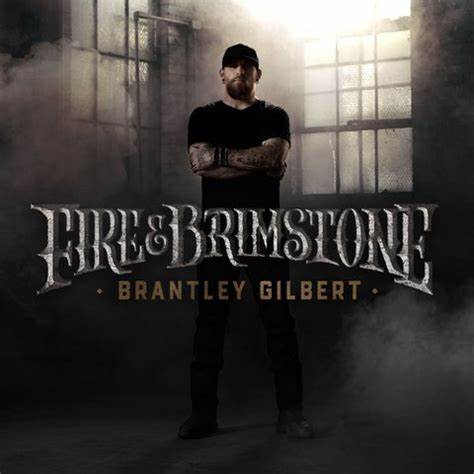 The first and last words on this record are spoken by Brantley Gilbert.

At the start of “Fire’t Up” he says: “It gets rowdy down here, son” in the manner of the security at the Sons Of Anarchy clubhouse.

Almost an hour later, something a lot sweeter is on his mind. At the conclusion of the “Man Who Hung The Moon” a gorgeous song about his baby, he offers this: “No matter what, no matter where I am, just know that I love you, with all I am. Me and your mama both.”
And to be honest, that’s mostly what you need to know about Brantley Gilbert.

“Fire And Brimstone” is country. It’s been out for a week or two and it crashed into the number one spot on the Billboard Country Chart. That being said, “country” is a board term, so this is from the Eric Church, Brothers Osborne, Kendell Marvel end of things. Primed and ready for gold records, because it knows what its fans want and gives it to them in spades.

The aforementioned “….Up” for example, has a kind of TC3 thing going on, and the rock n roll grit of “Not Like Us” lays its cards on the table. You’re either with us, or against us, and if you are against us, there’s the door.

“Welcome To Hazeville” (sample line: “get your homegrown ready, the smoke’s gonna rise”) is one of the many that have special guests. These are A-list too. Willie Nelson? Lukas Nelson? Colt Ford doing a spot of rapping? Yep. All here.

If that one, actually, might broaden the boundaries, then “What Happens In A Small Town” is exactly what you expect (and dare I say want?) from Brantley Gilbert. And in its own way, shows the worldwide crossover appeal of “….Brimstone”. This is a middle America that we all believe in. Even those like me who are in the middle of England. This is what we imagine, this is what we are here for.

It is also brilliantly conceived and features wonderful vocals from Lindsay Ell, and a guitar solo that is pure Richie Sambora from about 1989. That 80s vibe continues throughout “She Ain’t Home”. This is the one that is going to be the break-up song for every country kid in the US this winter.

Not being a religious sort, I can’t comment really on “Lost Soul’s Prayer” but I will say it has an interesting guitar line and works on the principle that you’d best not bore us, just get to the chorus. They all do, actually, and that’s why this is a solid Gold hit record.

“Tough Town” is, in political terms, appealing to the base. “We’ve been red, white and blue collar, god and country all these years” he sings here, and you just know that he means it, so do those who are buying it.

Jamey Johnson and Alison Krauss help out on the title track, a more acoustic reflective affair, “Laid Back Ride” proves that everywhere you look here, there’s a million seller, “Bad Boy” was one of the many singles on it, and even its gentle tones probably speak to the hearts of many.

And that, is “Fire And Brimstone” as a whole. “New Money” is basically begging to played at a Monster Truck rally, and this the feeling that is polished as you like is all over “Breaks Down”, “Breaks Down” on the other hand sounds just a little more organic and there is no doubt that Gilbert knows the formula – and exactly how to mix it up.

The end of the record is largely one ballad after another – and the pick of them is “Man Of Steel” – and there is another one to finish. “….Moon” as I said, is for his baby and sounds like it is more personal than most here. Like the others, though, it is a superbly crafted song.

“Fire And Brimstone” is going to sell millions whatever anyone’s opinions are. That’s almost a given, but goodness me, few know how to do this better than Brantley Gilbert. No one knows their audience and what’s required better than this, either.