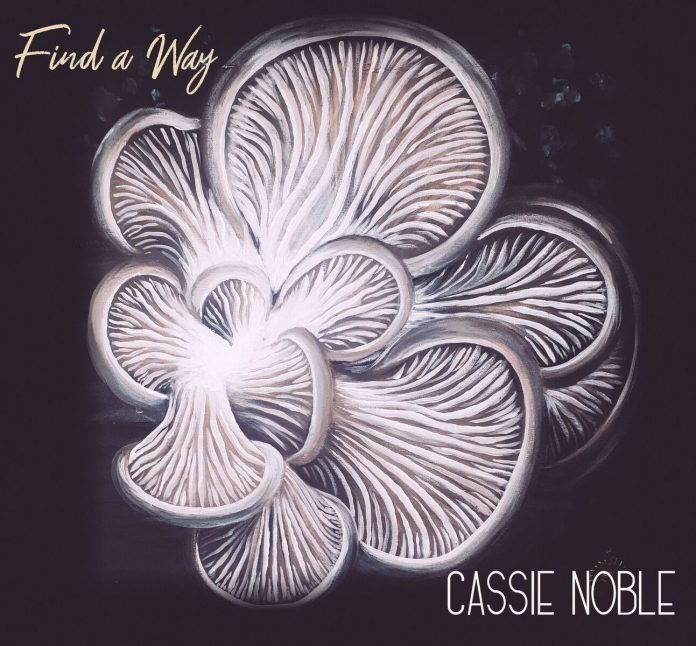 Cassie Noble is a folk rock, singer-songwriter from Cameron, Ontario who cut her teeth with High Energy Rock and Roll band The Do Good Badlies. This took her out of her comfort zone and as they played hundreds of shows and travelled across Canada over the years, she found more and more of her own musical identity. Cassie’s solo song writing style is mellow, often heavy with emotion, each song a little different, as it should be, representing a different stage on a continuous path, through the phases of her life. Cassie has a five track EP called `Find a Way` which relates her penchant to love and life, with all its beauty, sadness and joy.

The opening track `Lost At Sea` has a hypnotic strummed guitar, which allows Cassie`s clear sensitive vocals to express how lost, overlooked, and restrained she`d felt for a long time. There are some sweet harmonies and superb guitar inflections towards the latter part of the song. The lyrics “Jump into me don`t feel afraid” seems almost and analogy on the title of the song and the artists life.

I felt that `By Now` was quite a reflective track, almost a realisation of where the singer feels she is and deciding that she needs to change her situation. The chorus of “You think I would have learned by now” a sort of revelatory moment and the impetus for change. The music is a mellow platform for this philosophical narrative.

`Medicine` is a more assertive offering. Cassie has said that it expresses her newly discovered freedom and independence. It also alludes to meeting new people. It has quite a full sound although it`s just a strummed guitar and the singer`s more confident vocals.

The singer has said that the final two songs `Brave` and `Build A Home` are about finding new love and happiness, struggling to hold onto it and creating a life that I truly believe in living. The former is an uplifting elegy which conveys the uncertainties and apprehension of this new relationship but reaffirms that they will overcome any difficulty that comes along. There are some really melodic harmonies, piano splashes and a cello input on this optimistic composition. The latter is a more phlegmatic tune which expresses the realistic almost pragmatic functions that will sustain a relationship. The tinkling piano keys ensure that this number doesn`t become too stark.

I thoroughly enjoyed this introduction to a singer-songwriter, of whom I knew little, There is a real honesty, sincerity even vulnerability in the lyrics and some skilful guitar playing that strengthens and enhances this. I`m sure this will be a foretaste of what`s to come for this entrancing musician.