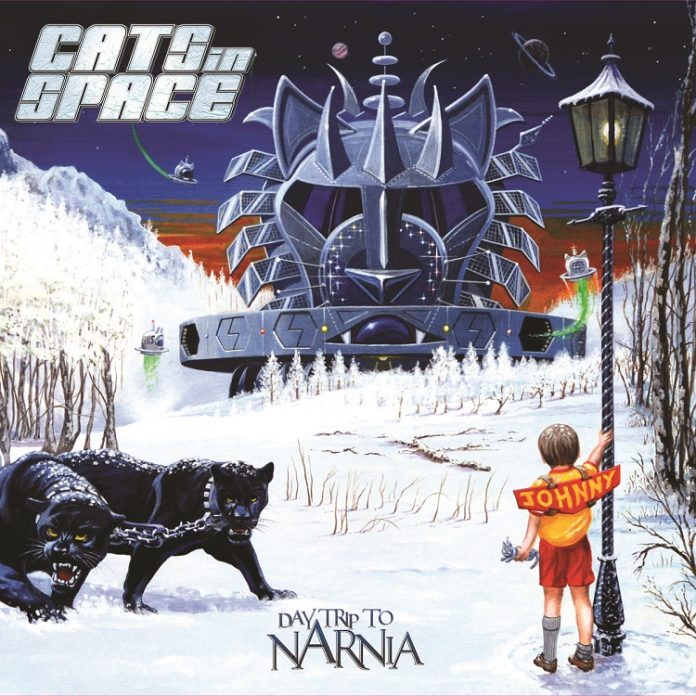 I’ve been going to gigs for almost 30 years. In that time, I’ve seen some crap, but the worst, to be fair was Elvis.

Not some tribute act. The real thing. With his real band.

Whoever decided to stick the king of rock n roll on some massive sheet and have the musicians playing behind him as they recreated the ’68 Comeback Special was a money-making genius (the Birmingham Symphony Hall was full that night, and the ticket wasn’t cheap, either) but they were also culturally moribund.

I’d repressed that memory, (it might be psychologically unsound, but it works) until I listened to Cats In Space’s “Hologram Man”.

A rather vitriolic – and totally just attack on such nonsense – sees Paul Manzi sing: “He won’t get tired of playing, we’re selling loads of merchandise, the Golden Goose keeps laying, and everyone gets a slice…..” and that, right there, is the nail on the head.

But there is another line on that song that rather better encapsulates the vibe of this record. “How I long for the days of Top Of The Pops” it goes and to be fair, Cats In Space would have been ace on that, they really would.

I was only five years old when the 70s became the 80s, but allowing for the fact that if I’d have been ten years older, then Thin Lizzy would have been my favourite band, I’d have definitely been a glam kid too.

And close your eyes, to be honest, it could really be the 1970s again throughout most of this. Not because it’s dated, rather because that is what Cats In Space want to be. Listen to “Narnia” the opening track, and you are instantly transported into a world that is somewhere between Mott The Hoople and ELO.

And transported to a fantasy world too, because even the lyrics acknowledge that rock n roll should be some kind of escape. “Another night under the lights,” sings Manzi, “changing someone’s life out there, but my desire is by the fire, and reclining in my comfy chair…”.

Even better is the glorious two minutes of “She Talks Too Much”. A power pop masterclass, in honesty, and with a nudge-nudge, wink-wink double entendre of the very highest order. “Her lips won’t stay together” probably refers to the chatter, obviously.

“Tragic Alter Ego” is a gorgeous piano based thing– think Elton John with a hint of misery about it, “Silver And Gold” – even billing itself as a tribute to the golden age of glam – does the job perfectly, while there’s a wistful acoustic air to “Chasing Dragons and “Unicorn” has a real keyboard and Greg Hart’s solo is right up there.

That concludes side one, as it were (and you just know they are the type of band to think of this as a vinyl record) and side two is taken up with one movement. Ish. “The Story Of Johnny Rocket” is actually split into seven songs, but there’s no doubt that CiS want you to enjoy it as a whole.

It even passes my philistine test. That is to say forget the story, is the music any good? The answer is yes, hell yes.

“Johnny Rocket” has a real hint of The Who about it, and is quite superb, “Thunder In The Night” is very much their “I Was Made for Lovin’ You” moment and is more disco than a glitter ball, to be honest.

“One Small Step” revels in its simple harmonies, The Beach Boys might be jealous here, and if I’ve resisted saying the name “Queen” throughout this, there comes a time when you can’t ignore it, and that time is “Twilight”. “Yesterday’s News” had me thinking 10CC and anytime that happens is just fine, while “Destination Unknown” actually sounds like most modern thing here. Unashamed to be pop music and absolutely glorious too.

The destination for Cats In Space is interesting. It should be the arenas that their heroes inhabited, that’s where they deserve to play (and not just as support to Deep Purple either, although they were fun then) but then, that probably belonged to a different era. It’s an era that is still alive and well in the hearts of many, though and “Daytrip To Narnia” is a most magnificent journey.