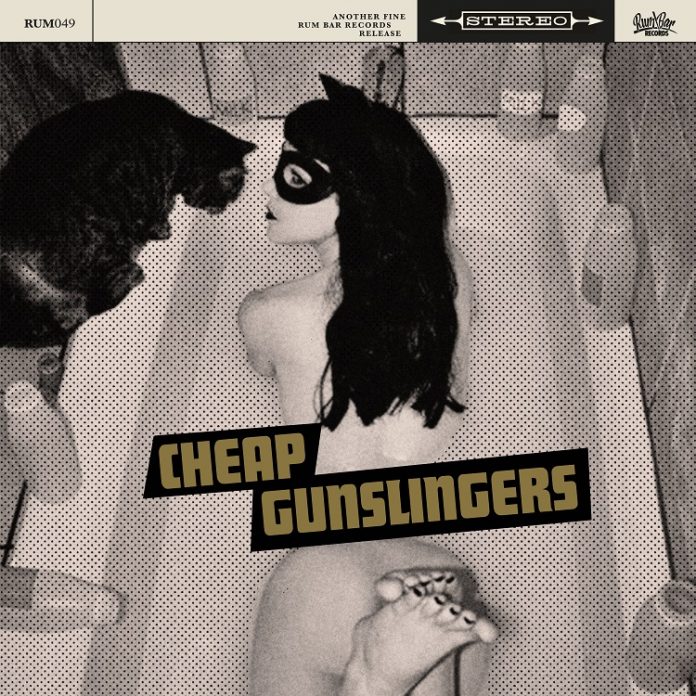 It says much that this album – almost, but not quite literally – starts in a record shop.

Half an hour later it ends with “Bars Of The Song” a classic, bluesy ballad, with more than an air of Johnny Thunders about it. “its all over, all my dreams have died,” half speaks Edo McGrady, before at the end saying this: “I’ll be waiting, in the bars of this song”.

And I get it. Because for some of us – and yeah, I am one of them – you live vicariously through rock n roll. The character in the opener, “Record Store”. That was me and my mate. “If the store is closed, hell, we got nowhere to go.”

For Cheap Gunslingers, for legions everywhere, rock n roll is where they (we?) feel most at home.

These ten songs are sort of for us.

Not, though as much as they are for the band themselves. Formed four years ago by Florida punk rock royalty, Cheap Gunslingers have had to overcome all kinds of adversity, not least the unexplained disappearance of Melissa DuCasse, a performance artist who was integral to their vision, but who remains missing to this day.

After a hiatus, the rest regrouped and decided they needed to carry on.  Perhaps because of this, there is a sort of glee to the sound – if not the bleak lyrics.

“Good Time” has glorious, Ramones-like harmonies, but a real darkness elsewhere. It is far from a alone in this regard. “Defective” stomps around a little like The Stooges, but it needs to be said that these are all pretty memorable.

“Three Chords” might well discuss what binds all the musicians here together: Three Chords and the truth. What else do you need?

“Run Girl” is garage punk with a ska hook, and as for the delivery, anyone who, like me, was introduced to punk rock really by bands like Guns N Roses and Skid Row covering the greats might recognise it.

“Junky Friends” – as do many of them in truth – has some brilliant low-slung guitar, “Please Kill Me” is somewhere between “Keep On Running” and classic blues, and is a huge highlight.

There are all kinds of different textures here, though. “Water Table Line” is blue collar and mid-paced like The Replacements. That this is followed up by the appropriately named “Off The Rails” is basically this in a nutshell. I was arguing with someone at the weekend, in the wake of “Western Stars” being released that Springsteen’s “Nebraska” was essentially a punk rock record – I am probably talking crap like normal – but if that had been a full band effort, this is how I always envisaged “Open All Night” would sound.

Whether I am right, wrong or hopelessly wide of the mark there, I’ll let others judge, what I am absolutely certain about, however is that Cheap Gunslingers’ debut is bang on target.

THE KIDS KEEP IT IN THE FAMILY