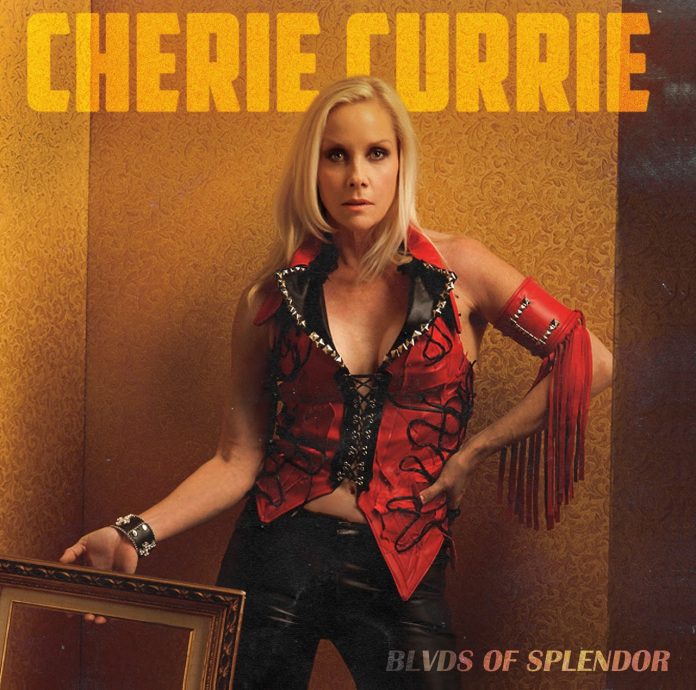 “Even if the day should come, when all my battles have been won, I wouldn’t stop to catch my breath, I’d put my mettle to the test.”

Cherie Currie: Force To Be Reckoned With.

In many ways, that really should be the title track – it’s one of the best, for a kick off – but more than that, it’s the spirit of the whole of this collection, writ large and imbued throughout.

Originally released for Record Store Day last year, someone has decided that “Blvds Of Splendor” [sic] is worth a full release. Whoever it was, give them a pay rise, because it is superb.

Cherie Currie has a past and a half. A Runaway, with Lita and Joan, she re-wrote the book on what a “all-girl” (and God, how I hate that term!) band should be, and with her 2015 comeback record “Reverie” she showed she had plenty to offer.

“…Splendor” has been in the works since then, even before, but it was derailed by her health problems, and an accident at home amongst other things , but good things come to those who wait and all those other clichés. Honestly, the 15 songs here are so, so good.

Opener “Mr. X” (one of several to wheel out the big guns. Matt Sorum and Slash, if you please) is an early spotlight to how good this is. Punky, trashy, and so catchy that Donald Trump probably thinks you should inject bleach to ward it off, she is in suitably sassy mood too: “He’ll only kiss it where it counts until the morning sun,” offers a line here. There is more where that …urmmm….came from.

This is followed by “Roxy Roller”. Glorious 70s sounding glam. Suzi Quatro and T-Rex. It’sa cover (didn’t know that, to be honest and nor do I care) but it is exactly what this should be about and so often is.

The outright sleaze of “You Wreck Me” is metal tinged, with the dirtiest bass you’ll hear,  but goodness me, it shines, as does “Black Magic” with its synth aping of an 80s computer game before exploding in the chorus.

The title track sees Currie and Billy Corgan trade harmonies over something appropriately Pumpkins-esque, but when CC wades in with a casual, “I’ll kick your ass”, you suspect she’s not joking.

“Bad And Broken” chugs like the best experienced hard rocker, while the darker “Rock N Roll Oblivion” was not written by her, but does show Currie’s skill as an interpreter of songs, because she owns this one. As she does in “Shades” – like the aforementioned “….With” written with her son (in an echo of the superb Quatro record last year) – which is a lovely ballad and a vehicle for a fine voice, but something about this record suits the harder ones. “Draggin’ The Line” (another cover) or the slamming almost punk of “Breakout”. That’s not to say the cover of The Hollies “The Air That I Breathe” isn’t excellent too, because it is.

This full release has three new songs on as bonuses. The Eagles-type 70s sounds of “What Do All The People Know” is a cracker, “Gimme” is a two minute slice of power pop that essentially shows everyone else how its done, before the I’s are dotted and the T’s are crossed by one, you suspect they all enjoyed.

Brody Dalle and Juliette Lewis & The Veronicas join her for the brilliant “Queens Of Noise”, and its clear, when they suggest in the chorus “come and get it boys” that pretty much none of us is man enough to take them on.

This Boulevard, these streets, this glam rock? They belong to Cherrie Currie, and she’s not giving them up on this evidence. “Blvd Of Splendor” is rather splendid. Simple as that.