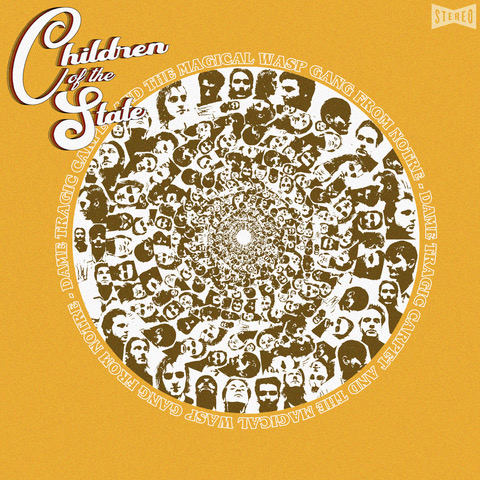 Children Of The State are a blend of seventies glam rock, sixties nostalgia and electronica influences comprising John McCullagh (vocals, guitar), Nathan Keeble (guitar), Corey Clifton (bass), Conor O’Reilly (drums) and Harry Eland (keyboards, organ). The band have played a number of festivals and have supported Temples, The Mysterines and Elephant Stone. “Tragic Carpet and the Magical Wasp Gang from Notre Dame” is a four track EP and is the band’s first work since relocating to Manchester from Sheffield.

`Hot Money` kicks us off and it has a big echoey resonation with a hypnotic beat, fuzzy guitar, shrieking horns, and shouted harmonies on the title chorus. A sleazy observation of greed and extreme capitalism at the expense of traditional values.

I read somewhere that `On A Clear Day You Can See Forever` was inspired by The Zombies and it does have a real sixties vibe, a swirling, wonderfully expansive sound. A constant drumbeat, eddying keys and some intricate guitar chords allow the heartfelt vocals to sparkle atop.

`Baby, Can You Dig Your Man? ` is a top-notch thumping rhythm and blues track that had me in mind of the legendary Pretty Things. It had a splendidly period texture with guitar effects, spiralling organ, and harmonica swathes.

There`s a mesmerising feel to `Give Up The Ghost` which closes out this extended play. Again, it has sixties references musically but they are superbly captivating.

Children Of The State may have a retro sound but it certainly has a modern twist and a vibe all of its own. There`s a sense of unease and paranoia at times throughout these songs but they are thoughtful well structured. The band have been described as Apocalyptic retro-rock and I’d find it hard to argue with that.