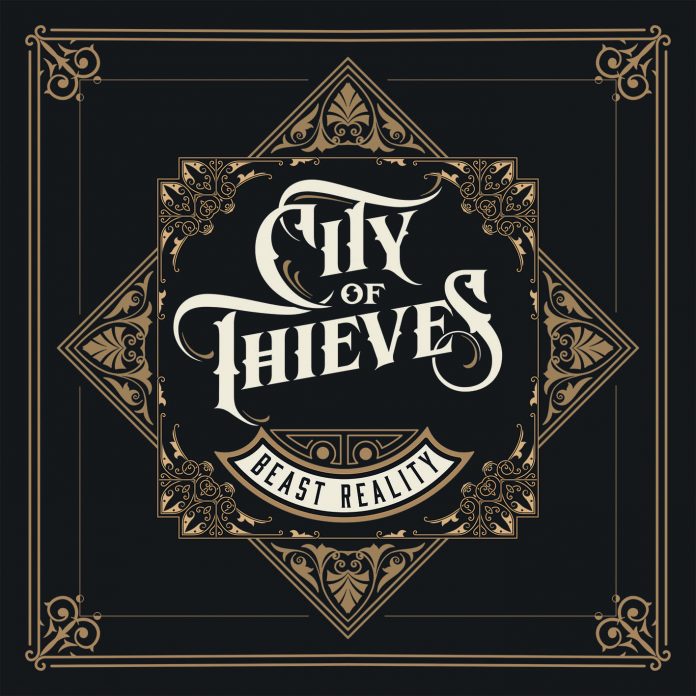 Just over three years ago (and crikey, how time flies!) I reviewed an EP from a young band called City Of Thieves. Predicting big things for them, I chirruped that the collection was a “five track study in self-confidence”.

Well, City Of Thieves are back, baby. And they’re back with a full-length and a record deal to go with it.

The deal is with the Frontiers label, and nowhere is better for signing the cream of the hard rock crop from Wayward Sons and Inglorious to Bigfoot – and actually, CoT are somewhere between all three.

This is music that on one hand has its eye on arenas and big old support slots, but it also knows that rock n roll needs to be just a little bit dangerous – if it hasn’t got the spirit of “Appetite For Destruction” about it, then really, what’s the point?

A top team behind them too. Mike Fraser, who has twiddled the knobs for AC/DC and Aerosmith amongst others mixes it (and goodness me, it sounds killer) while Toby Jepson (the aforementioned Wayward Sons, of course, but to me he’s always the singer in the Little Angels…..) produces the thing – interestingly, he does so with the band as Co-Producer, suggesting that everyone hear knew what they wanted.

That single-mindedness comes through all across the 12 songs. Three of them were on that EP. “Incinerator” sounds enormous, with a riff like a wrecking ball, “Lay Me To Waste” builds itself up before pretty much doing the same, while “Buzzed Up City” is young, brash and ready to go. Like some British take on Airbourne, it is loud, snotty and brash.

Anyone could – probably – write three brilliant songs, though. So in the context of the album it is the others that excite, because its these nine that prove that City Of Thieves are in it for the long haul.

Quite frankly, it is clear there is something special afoot right from the kick off of the righteously filthy opening “Reality Bites”. “A pistol’s only fun,” offers Jamie Lailey here, “when its firing blanks in your face….”

“Fuel And Alcohol” rockets along with all the devil may care attitude of Motley Crue jamming on some AC/DC like they just don’t care, and “Control” comes along like it has urgent business to attend to and won’t be taking “no” for an answer anytime soon.

“Animal” is most definitely not a Def Leppard cover (it actually sounds like Rose Tattoo when they 30 rather than 70 like they were last week when I saw them) and in many ways it sums up the attitude here perfectly: “I dare you to try to stop me,” spits Lailey like really means it. “Because I’ll fight you, bite you like an animal…..”

It is that, really, that sets CoT apart. There’s loads of hard rock bands with a swagger, and to be fair, loads who could write a riff like “Right To Silence”, but precious few who could infuse it with such a cocksure attitude.

And that, actually, is why “Born To Be Great” works so well. It’s chorus: “if I was born to be great, the world will just have to wait, until I’ve taken it all in my stride” is perfect here, because you know that the three believe it implicitly.

“Damage” is an example of the fine lead work from Ben Austwick throughout, “Give It Away” fancies a bluesy boogie in what surely must be a spit and sawdust club at 1am in the morning so it has one.

This isn’t a record that needs a ballad – in fact it is a record that is better without one –  because heartbreak wouldn’t do – but it ends with something a little more mid-paced. “Something Of Nothing” deserves to a hit single (if anyone cares about such things anymore) but if this was some over-hyped, overpriced and under-talented bunch from America that sounded like Led Zep but dressed nicely, the media would be all over it (did someone say Greeta Von Fleet? Not me mate…..).

It’s rare that you get a debut this good. One that has you leafing through the memory banks for another reference point than Love/Hate’s “Blackout In The Red Room” or “Appetite For Destruction”. I’ll give you two. “Don’t Prey For Me” and “Backstreet Symphony”. Two British bands that didn’t do too bad, huh?

City Of Thieves are, given the quality on “Beast Reality”, right from that very same top draw.