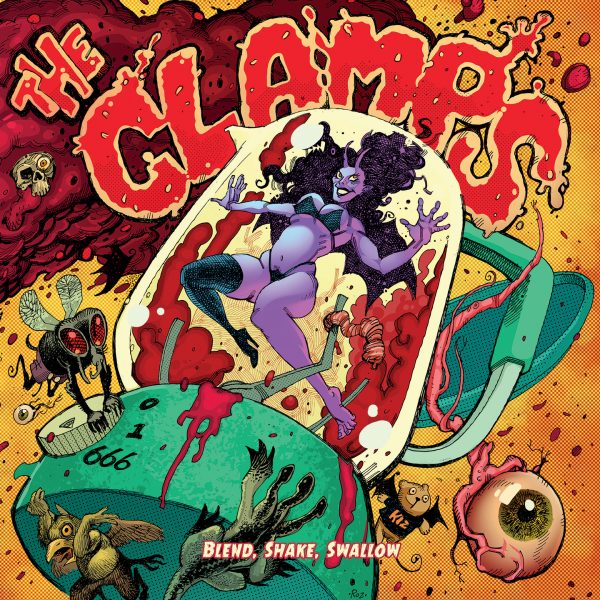 They’re ready. Best not to ask what for

New Years Eve at MV towers went like this.

Watched football. Drove back home. Watched a bit of cricket on tv. Reviewed a couple of albums. Went to bed at 11.30. Got woken up at 12 by the fireworks and got pissed off.

We don’t know what Italian three-piece got up to at the same time, but we’ll wager that such is the non-stop party that their lives sound like, they probably didn’t even realise it was New Year’s Eve at all.

The 11 tracks here claim they are perfect “for a fast and furious car journey to hell”. There isn’t much we can add to that here except to say that if that trip was a kamikaze mission to take on Beelzebub himself then that description would be somewhere close.

“Blend Shake Swallow” begins and ends with a riotous instrumental, “Barracuda”, in between it is packed full of all kinds of tasty noise. “Liar” adds a piano lick and sounds like The Hellacopters” after a shit load of E Numbers, “Must Destroy” boasts a hook that suggests “don’t look in the past” and this is uttered with all the conviction that MV would really advise against it.

Elsewhere “Get Ready Now” is a high-speed into the self-explanatory, and “Fake And Blind” is a snotty, potty mouthed piece of gloriousness that is somewhere between Motorhead, Backyard Babies and Bonafide, and by the time its soaring chorus has hit, then frankly you would happily give The Clamps the deeds to your house if they asked.

It could be argued that “…..Swallow” is a bit of a one trick pony, but that doesn’t matter, when the magic is good as here, “Nacho Vidal” packs more fun than should be allowed into less than four minutes, and “In My Head” poses the very real question of: would you like to even know what happens there?

Like driving a wrecking ball into a model village, there is no escape here. “Dirty Little Girl” is as viscous as you’d expect it to be, and although “Enjoy The Ride” implores you to do just that, then you’d do so at your own risk as who knows what you’d catch?

The last proper track “One More Time” is slower with more groove and hints of an almost stoner intention, but even here they infuse it with something that is like a Peter Pan Speedrock jamming with Zeke just for the hell of it.

“Blend Shake Swallow” is perfect for one of those “new year, new you” bags of bullshit. Low calorie, because they’ve trimmed all the fat off,  and its a damn sight more fun than a trip to the Gym. This is purely and simply downright glorious