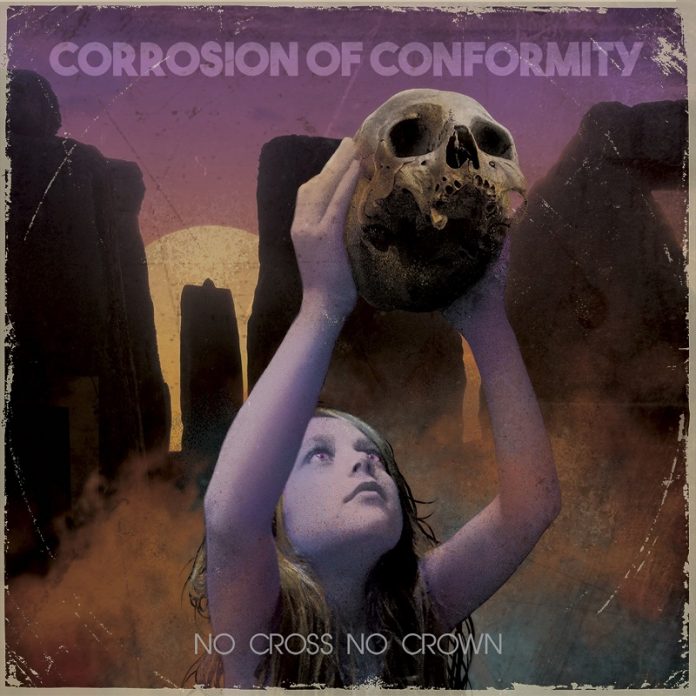 The first review of 2018, and it just needs added Pepper….

Not for nothing does “No Cross, No Crown” start with a heart beating. It’s about expectation, hopes, and yeah, some trepidation. Like the press release that accompanies this says: “Whenever Corrosion Of Conformity releases a new album, folks take notice. But their latest is a true event.”

And why? Well, what has been a trio on the last couple of records (the self-titled 2012 effort and 2014’s brilliant “XI”) is back to being a quartet including Pepper Keenan. In the tortured history of this band it is the albums with Keenan as singer, in particular 1994’s “Deliverance” and 1996’s “Wiseblood” that to MV at least, defined the band.

Every fan will have their own story, their own favourite, but let us just offer this. When MV first went to see Metallica in the mid-90s it was because Corrosion Of Conformity were opening.

All of which makes “….Crown” – the first time Keenan has appeared on an album since “In The Arms Of God”  13 years ago- the biggest of big deals. The even better news is this: it doesn’t live up to expectations. It surpasses them.

“Novus Deus” – the one with the beating heart – acts as an intro, and the band always did like their interludes, and they announce themselves with “The Luddite”, all southern fried stomp, trademark melody and that guitar sound they always get. By the time the solo hits, you can stop worrying: baby, they’re back.

By their own admission they went back 25 years or so to look for inspiration here (long-time producer John Custer is at the helm to reinforce that), and there is a feel of “Clean My Wounds” about “Cast The First Stone.” A chug which blows the cobwebs off, a twin solo that is just the band having fun, and who knows, wondering why they stopped doing this in the first place?

Whatever, there is even better to come, “Wolf Named Crow” is the zeitgeist bottled. Proof that no one did this better – and it takes a special kind of genius to write a song based on Keenan’s dog (which, says the man himself, this is).

Nothing is too long here. “Little Man” stretches itself to start with a solo, and you can almost smell the barbecue over it’s wonderful harmonies. “Forgive Me” on the other hand, eschews that in favour of being a simple hard rock stomper, albeit one pulled off with absolute panache.

There are a couple of slower moments, trips to the swamp if you will. The first of these is the wonderful “Nothing Left To Say”, which has something evil lurking in its chorus, “Old Disaster” is back with more urgency and built around its brilliant guitar work as Woody Weatherman reminds everyone how good he is, and “E.L.M” gets bonus points for having a flavour of Thin Lizzy about it.

The title track is back in the shadows, doing all kinds of nefarious things, with the potions brewed by Sabbath as its catalyst, the sound of horror, it is a jarring contrast to the rest, while “Quest To Believe (Call To The Void)” ends the record in perhaps the heaviest fashion it has mustered as Reed Mullin and Mike Dean prove that they are a formidable engine room.

In an interview leading up to this, Keenan spoke about being back in the band. He said this: “[CoC] could be the David Gilmour/Roger Waters thing, where they go separate ways with two different bands. That’s not worth it. When you see bands do that, you think, ‘Dude, just bury the hatchet and jam. It’s not that hard.’” It ain’t when you have this chemistry, this ability and can make it look so easy. “No Cross, No Crown” is everything you could have dreamed about as a Corrosion Of Conformity” fan, but yet some more besides. Starting the year with a ten out of ten might mean the only way to go is down. However, this album is the sound of a band reclaiming their position as kings.