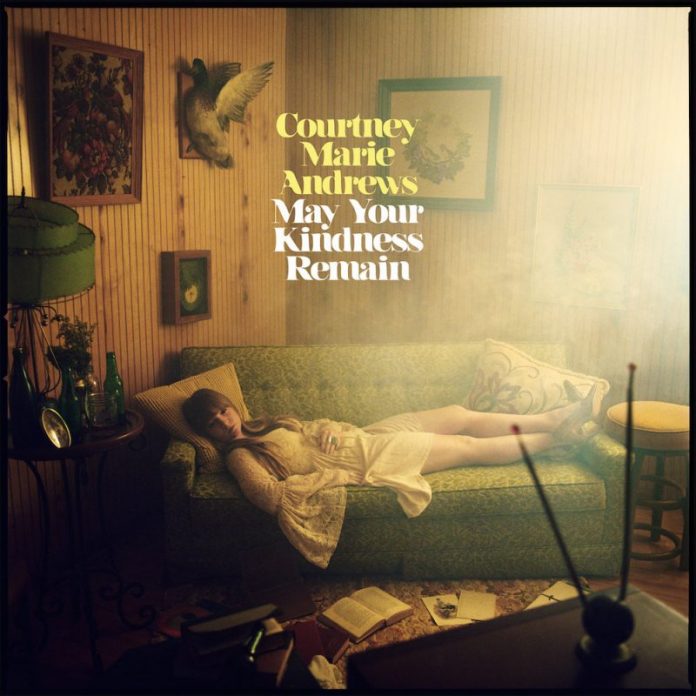 Courtney Marie Andrews made something of a breakthrough last year, when her “Honest Life” record garnered plenty of praise from everywhere – notably a nomination for artist of the year at the UK Americana Awards.  Drawing comparisons to everyone from Guy Clark, John Prine, Joni Mitchell, Emmylou Harris, Linda Ronstadt and Glen Campbell in the process.

The truth – as always – is a little more nuanced than the headline. She’d spent a decade trying to make it before the “overnight” happened, and had a stint (amongst other things) as a back-up guitarist for Jimmy Eat World. It’s somewhat similar with the people that she is supposed to sound like. They are all true, but it’s more than that. “May Your Kindness Remain” is a record with the Of Mice And Men of Steinbeck and America’s dustbowl at its heart.

Beginning with the beautiful title track, initially the song is all about Andrews’ gorgeous voice, but even here there is more going on. Well-picked out guitar elevates the tale of those “drunk on a barstool, throwing your pay cheque away” which switches gear before the end.

This is typical of much of “…Remain”. There is a sort of in-built confidence and class here to lift this above the norm. Andrews says that the stories here are based on those she’s met on the road, but there is a kind of deep-rooted sadness in the organ drenched “Lift The Lonely From My Heart” that shows her gift for writing these characters.

If the central pillar of the whole collection is that American Dream is failing its people, then never is that better expressed than on the bluesy “Two Cold Nights In Buffalo”. The undoubted highlight here with its vivid imagery, it laments the death of small town America. “What happened to the Middle Class? Mom And Pops, the Five And Dimes, soon they’ll be knocking it all down to build that high-rise,” she sings and in doing so, surely sums up the entire record.

There is a fragility at the core of “Rough Around The Edges” which sees the piano as the driver, while soul drips all over “Border” which is as widescreen as the desert sky that informs it and the emotional “Took You Up” is built around some strange instrumentation as if nothing was off-limits here.

“This House” is a well-thumbed tale (essentially it takes more than bricks and mortar to make a home) done well, primarily because of the small details giving it a sense of reality, but also because the organ has a brilliantly mournful quality. “Kindness Of Strangers” follows this with a real change of pace – indeed it sounds like something that could be off a latter-day Counting Crows record.

“I’ve Hurt Worse” is a world away from the happy ever after of usual love songs – another example of the reality of this album compared to others, perhaps? Either way, it is surely the way for many people, for whom “that’ll do” and accepting their lot in life: “I like you, honey, being with you is like being alone” isn’t getting on many valentine’s cards, but it’s far better.

“Long Way Back To You,” which is the end of the record is the only time that Andrews sounds demur, but she does so with superb harmonies and some fine lead guitar.

It provides a fitting conclusion to a record that deserves any accolade that comes its way. Awards and acclaim will surely follow too, because make no mistake, “May Your Kindness Remain” is one of the Americana albums of the year.