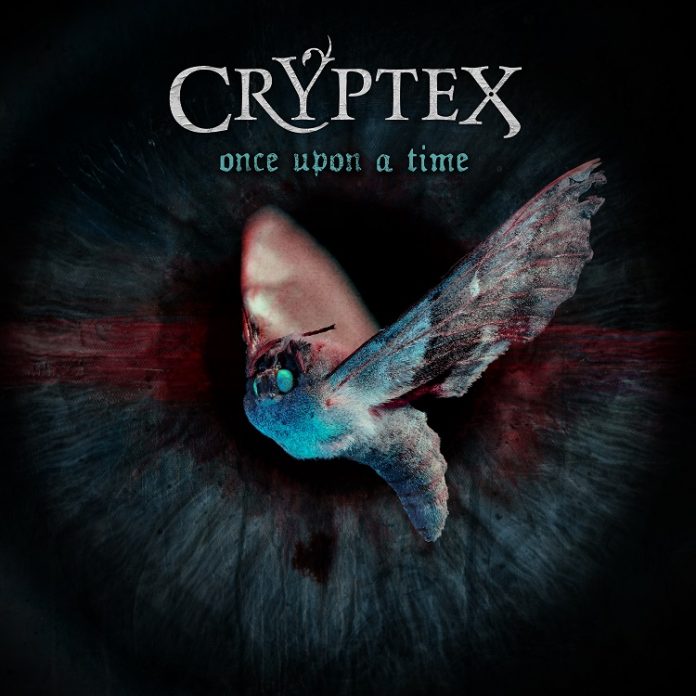 Whistling in songs. Whether you are a fan of the sound or not, usually it indicates a happiness, a carefree nature. Even on “Patience” Axl Rose sounds kinda chilled.

Somebody whistles the end of “I See It In Your Eyes”, towards the end of “Once Upon a Time”, and let me tell you, when Cryptex do it, man alive! It sounds like the most foreboding thing on the planet.

That metaphor actually, that of being something else entirely, sort of suits the German three piece. Even the name of the band, when I first saw it, seemed to indicate one of those Industrial type bands that spring up from that nation. The harsh electronica, the bleakness.

One of those things certainly happens.

The last track here – its probably best to think of this as a kind of concept album from the depths of the most harrowing diaries anyone has – is called “Leaving” and it sees Simon Moskon deliver a kind of spoken word piece that contains the words:  “I really want to kill you, maybe I should kill myself?”

So, in the end, which this literally is here, what sort of band is this? What sort of album is it? The honest truth is, I don’t know on either count.

Let’s work through it from the beginning, shall we?

There are only a couple of hard, cold facts about this. Cryptex are a three piece (Simon Schröder on drums here is not listed as being part of the band) they are from Northern Germany, and “Once Upon A Time” is their third record. For the rest of this you will be on your own.

That’s not as glib a statement as it appears, either. Because you could probably put 10 people in a room listening to this and they’d all hear different things. Some would love it, some would hate it, some not sure.

One thing you can’t fault is the scope and the ambition. One minute the title track is like a film soundtrack, the next its like former touring partners Pain Of Salvation, the next there’s a melody that you didn’t see coming. And in one thing, it sets the tone: “mendacious is your mother tongue” sings Moskon and assuming the lyrics are anywhere close to autobiographical, the girl who broke his heart did a job.

That’s just part of the incongruous nature of the collection, because its rare that this type of prog rock (and it can only be loosely called that) rarely gets as nightmarish as this.

“Because The Reason Is You” has just a touch of Avantasia about it, and is probably the standout moment, with its hard rock chorus and shiny hook, while “Bloodmoon” which follows, is deep, dark and evocative. The keyboards are to the fore here, as they are in most and they add to the sound in an impressive way.

Considering the type of album this is, it is striking that “Bloodmoon” is one of only two songs that are over five minutes long, and the harmony vocals here are excellent.

Even “Body Language”, with its spoken word bit quoting from the Book of Revelations, is a four minute rock song, with a cheery nature until you scrape the layers. “Two-horned Crown” sounds a little like something Epica, say, would do, but adds a Sax to the mix, just to through you off the scent.

“Haunted” is more your heads down, foot to the floor power metaller and on “Reptiles” André Jean Henri Mertens finds an angular riff, and the drums have a sort of Therapy? tight, taut quality, but the turns the track takes are rather away from that.

At times, it feels like this is an odd sort of musical-cum-performance piece, and one of those times, “I Don’t Know Why” – to be brutal – is downright weird. It gets odder, as we’ve discussed, but not before “The Promise Keeper” which has just a hint of 70s pomp rock about it.

And then, well then its where we came in….

The band reckon this is the “story of a fairy tale that was never fully told.” If it is, its one of those Tim Burton ones, that’s for sure.

So, at the risk of sitting on the fence, I am in the “not sure” camp with this. It’s incredibly well thought out, resolutely ambitious, and you can only admire that it is absolutely not about to fit a neat box. “Once Upon A Time” is a journey, that’s for sure, but it isn’t a simple trip.