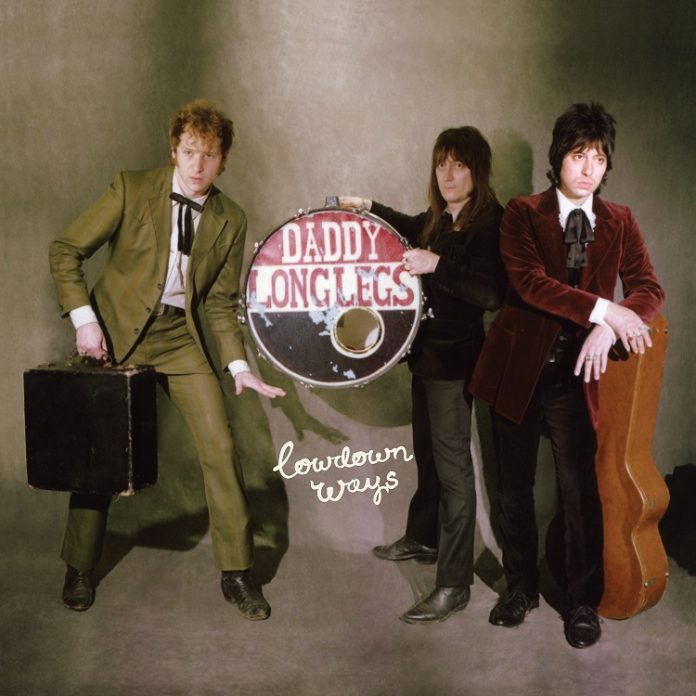 If your mother was anything like mine, then when you were growing up you were always told: “Never judge a book by it’s cover” (I was also heard the phrase: “I am not angry, I am just disappointed yet again” often, but that’s a whole different story.)

With no disrespect meant to the late Mrs. Thorley, now I am a grown up I can say with something approaching certainty, that such a sentiment is complete bollocks.

If it looks like a duck, has feathers and quacks, then what you are probably dealing with is, in fact, a duck. In the case of Daddy Long Legs, if you are dealing with three fellas who look like they stepped straight out of a 1950s rhythm and blues band, then “Lowdown Ways” is your cast iron, copper-bottomed proof that they wish they had.

Straight outta Brooklyn, in their crushed velvet suits Brian Hurd, vocals, harmonica, guitar, Murat Akturk, slide guitar and Josh Styles – drums, maracas, are a throw back to all kinds of things, but first off, you’d best believe that whatever is in these 12 harmonica drenched groovers sounds absolutely filthy. Nefariousness is a given here. You can imagine Mick and Keef passing this around before recording the early Stones stuff, but amazingly there’s not a cover to be seen.

“Pink Lemonade” – written with JD McPherson – is catchy as you want, and if you can’t love 181 seconds of blues called “Ding Dang Dong” that is a Hurd original, but still sounds like Howlin’ Wolf, then frankly, you’re in the wrong place.

Hurd, actually sounds like he’d sell his soul to the Devil at the crossroads just for a laugh (and frankly, I reckon Beelzebub might be so concerned at what he’d brought, he’d ask for his money back……).

Goodness (that’s palpably the wrong word) knows what “Mornin’, Noon and Nite” is about, but it would be so scary that I wouldn’t want to find out, and “Glad Rag Ball” is what it would be like if Jon Spencer decided to really let himself go and jammed on a lick with Jim Jones while he was about it.

That’s one invitation to the dance you ‘d probably turn down, to be fair, while “Bad Neighbourhood” has a kind of incessant throb, and its as if they deliberately moved to the place just because it was there.

“Celaphine” is a tale of love with the first line “she’s no angel and I am no saint” and it captures the vibe perfectly. “Winners Circle” does too, showing them proudly as outcasts over a tune that doesn’t half recall Chuck Berry’s classic “Promised Land.”

“Back Door Fool” slows the pace for a slice of front porch blues that belongs to the south rather than Brooklyn, its acoustic summery tinge could almost be seen as pleasant (granted these boys don’t do pleasant and it’s about a messy break-up, but still).

“Snagglepuss” gets massive bonus points for being the only song in the history of the world to start with the phrase “hey man, cat daddy”, and “Be Gone”, like most them wraps itself around the dirtiest harmonica imaginable, to do something resolutely primal and totally unreconstructed.

“Wrong Side Of The River” contains the line that sums Daddy Long Legs up best. The track itself sounds like it belongs on the credits to some Western set in the fires of hell, while Hurd sings: “when the last drink has been drunk, and the final song it has been sung we shall not return.”

“Lowdown Ways” is the soundtrack to the scariest party held this summer. You’re all invited, but you might not leave, and nor will you want to, if you’re honest with yourselves.