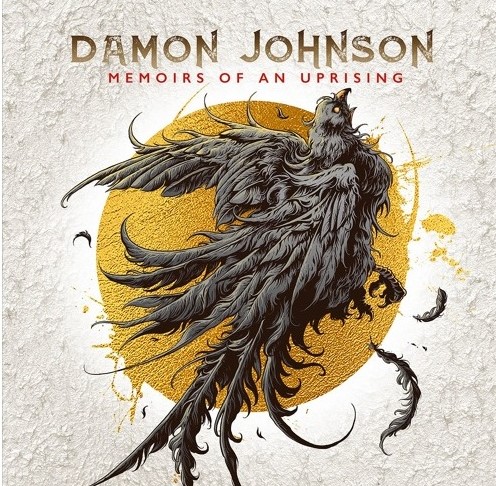 The other week I watched Ricky Warwick and Damon Johnson play an acoustic show. Two blokes playing songs just because they could, like the fans they are. That’s all it was too, and that’s why it was over two hours of the most fun you could have.

Damon got to play a song of his first band, Brother Cane called “Got No Shame” as well as one of his own tunes, the brilliant “Pontiac” – and in that moment you realised why he was choosing to give up the career he has as the guitarist and – along with Warwick – songwriter in Black Star Riders (there are doubtless reasons of family and geography for Johnson too).

“Memoirs Of An Uprising” is his first full-length foray into the solo world – following his superb “Echo” EP from a couple of years back – and, as it stretches out over its 10 songs you are struck by the thought that it isn’t quite what you’d expect. That’s a good thing too.

It’s a hard rock album – don’t panic that he’s gone all trip hop or modern metal on you – but right from the opening, brooding “Shivering, Shivering” it is clear no one here, either Johnson or his band members, were too interested in the rules.

That, though, has nothing on “Dallas Coulda Been A Beatdown”, which is genuinely menacing and violent in its imagery. “I told myself I’d never stalk him,” he spits. “Now I pass across him, and I can see the knife against his throat.”

“Down On Me” has the air of a Guns N Roses song, while “We Got A System” is melodic as you like, but its odd timing is indicative of the “anything goes” approach that Johnson – who acts as Producer here too – took.

“Call It A Trade” is another surprise – a stomping almost glam affair – but the lyrics are again a world away from BSR, except for a seemingly in-built ability to write a catchy hook. “Rage With Me” has a Cheap Trick type crunch, and if “So Brutal” has the odd bluesy flourish, then all it does really is show how good a guitarist Johnson is.

Given where he was born you might expect DJ to do the southern rock thing. He largely eschews this, although there is an almost Drive By Truckers flavour about the dark ballad “The World Keeps Spinning Round”.

The best thing here, arguably, comes just before the end. “Making Peace With This Wicked Beast” is a strutting, pouting rock n roll masterclass – but even here Johnson isn’t going to play with a solely straight bat, and subverts the formula somewhat.

“Memoirs Of An Uprising” ends with a genuine radio friendly rocker, “Glorious”, written with Keri Kelli (like DJ a former Alice Cooper sideman) and in its mighty chorus, Johnson sings: “we are the last of our kind, no one stands in our way” and in many ways, that is the point.

Music, to Damon Johnson, you guess is something he needs. He has a need to create, and he deserves credit for not only going it alone instead of taking the easy route, but also for blurring the lines the way he has here.