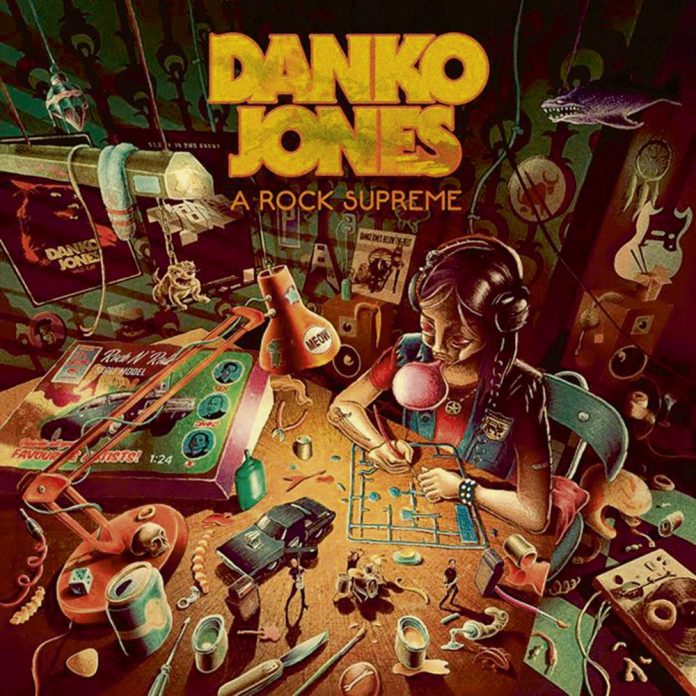 It would really help if you could imagine this with cowbell for added effect, but with the very first words on this record, Danko Jones has, rather neatly, described both what has driven him for 17 years and also why people love the outfit he gave his name to.

See, it’s fashionable to complain about being in a band, trendy to be honest with your fans and tell them how hard it is, how many hardships there are on the road. And to be fair, there probably are, and Lord knows there are those of us that couldn’t do it, even if we had the talent, because they can’t be away from home, couldn’t stand the spotlight, couldn’t cope with the pressure, whatever.

But real rock stars, man, they live for this shit.

They’re in a band because they love it. They need it. That want it. They are born to do it.

“We’re Crazy” is suitably unhinged, like Jon Spencer if his band was called “rock explosion” and not “blues”. This, though, is an attack that is rather more nuanced than some give the DJ boys credit for. “Dance Dance Dance” has a soul-filled rock groove, not too dissimilar from Lenny Kravitz, say, and it isn’t half catchy too.

“Lipstick City” is more your “classic” Danko sound, if you will. Crunchy, and bouncier than a trampoline, and with a knowing sass: “if you bring vanilla, I’ll bring the chocolate….” He says and you can almost hear him winking, and the glammed up sound here is straight off Sunset Strip.

If we’ve done (a lot of) sex and rock n roll, then “Fists Up High” fancies a scrap. “Step to me sucker,” is more than just a line in the chorus here, it’s a real, no fooling threat. That vibe is all over “Party” too, “I like it trouble if it can light up the mood” he sings (talks actually) and let’s be honest, no one here has any trouble getting in trouble at the drop of a hat.

A collection of plenty of twists and turns, “Burn In Hell” is a proper metal gallop, while the whole thing is bookended with the brilliant “You Can’t Keep Us Down” – and really, you can’t can you? You can’t stop rock n roll, as AC/DC once said.

It might be possible that Danko Jones has made a bad record. If they have, I haven’t heard it. “A Rock Supreme” is another to be filed as “from the very top draw”. A true original. And he loves it, you know.