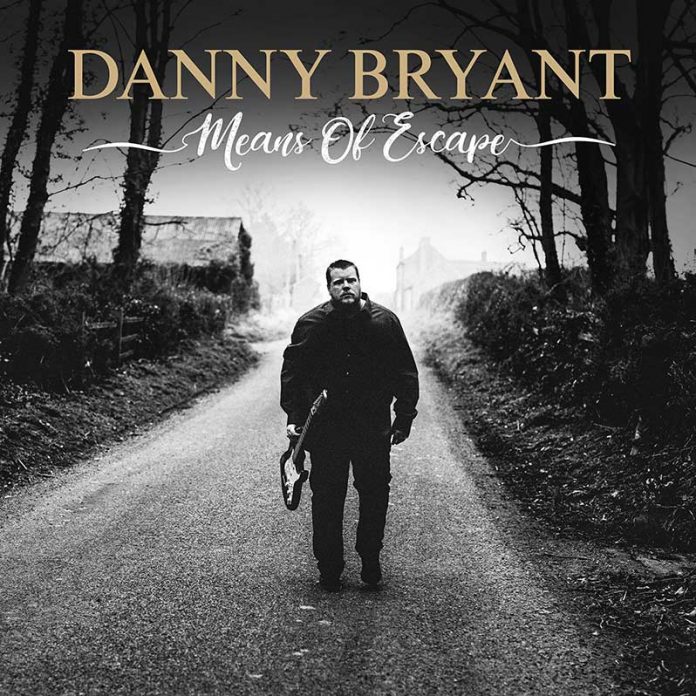 Right now, so many of our biggest and best “blues rock” stars (for want of a better phrase) are experimenting with all kinds of different styles and so forth.

King King went down a classic rock route for their last one, Kris Barras just has with his, Laurence Jones, has moved away from his roots and into some different areas, Bonamassa likewise (although he does so many that you are never sure what hat he is wearing) and Kenny Wayne Shepherd’s last album, although fantastic, was heavily southern rock influenced.

It is telling then, that on “Means Of Escape”, Danny Bryant has remained resolutely true to himself and the music he loves.

That much, actually, is clear from the opening strains of “Tired Of Trying”, the utterly glorious opening song here. His lead work his stunning, right from the off, and that voice – always weather beaten, but always just perfect for the music – is in full working order.

When I first listened to it, I wrote simply “Walter Trout” on my notes, and reading interviews with Bryant since, he came up with the track after dinner with the great man himself.

That in itself is interesting, because oN that list of bluesmen at the start, I left Trout off for a reason, because he is the blues. He lives and breathes it, and Danny Bryant is the same, it seems to me.

“Too Far Gone” adds some flourishes and touches, and is recorded with the Big Band that he sometimes tours with. The end result is that it sounds huge.

It was, like many of these, recorded in one take, and the whole of “…..Escape”, not least the title track, crackles with an urgency, an electricity, throughout. “Nine Lives”, which the man himself describes as “straight up Texas Blues”, has some marvellous Hammond Organ, and is a real highlight. It is amongst many.

“Skin And Bones” is a real change of pace. Dealing with the loss of his father. It is a fragile, acoustic track, and it sounds – at least to me, even if no one else will recognise it, I guess– like it could have come off Dogs D’amour’s “Graveyard Of Empty Bottles” record (still my favourite acoustic album).

“Warning Signs (In Her Eyes)” has a flavour or two of “Trouble” about it, and carries a real menace. The man himself reckons it is a nod to Gary Moore and you can see that, but again the organ drives this as much as the wonderful guitar.

“Where The River Ends” is another to deal with loss, a subject that Bryant is particularly sensitive with and its piano work is gorgeous. Superb, if harrowing, it is an unashamed big old ballad, and “Hurting Time” is mighty, and shows what a wonderful slide guitar player Bryant is too (he’s never shown this on record before, but hopefully he will again after this).

His playing his exemplary and the way he conveys emotion in his work puts Bryant right in the top drawer. He is never better, however, than on the incredible instrumental closer “Mya”, which is the work of someone with a real mastery of his craft.

He produced this himself. From which we can deduce perhaps, that “Means Of Escape” was his vision. His deep love for blues is shot through it. And if he uses music to escape, then Danny Bryant has seldom sounded freer – or better – than this.