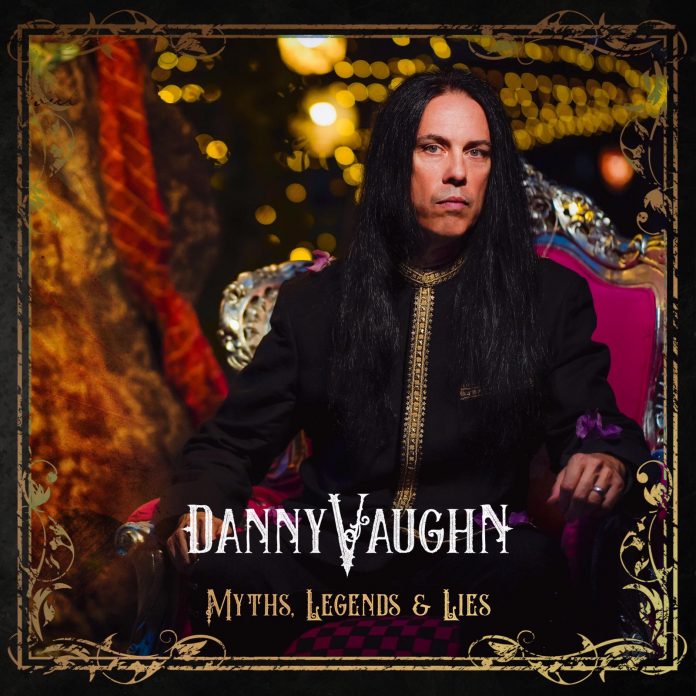 Everything you think you know, it’s probably wrong.

Generally that’s always true, but specifically here, in the case of “Myths, Legends And Lies”, you do wonder if an album has ever been better named.

Like anyone who grew up in the late 1980s listening to melodic rock, I knew Danny Vaughn’s work. At some point I am going to mention Tyketto in this review so I may as well do it now. I knew he had one of the best voices around. So when this came into the inbox I imagined I was going to review it, and I sort of knew what I’d be saying.

Except, well, everything I knew is wrong.

In the article that I had published on the website when it was announced, there is a line that now, in the context of what goes on in the course of this hour seems incredibly important: “This is the music I make when left to my own devices” says Danny. “When there is no schedule to satisfy and no target audience to audition for. “

Instead he popped off to Wales with a band that included Chris Childs, (bass playing god with Thunder) to hone this majestic collection.

However you were expecting this to start, I’ll stick my neck out here and say it wasn’t with an Irish Folk Song that namechecks both Irish rebel music legends The Wolfe Tones and the Munster Rugby team, but remember, whatever you were not expecting, this does.

The Celtic storytelling theme runs through this, and is prevalent again on “Man Or Machine”, while there is a blues about the glorious “The Missouri Kid” that recalls the Richie Sambora debut solo record from the early 1990s. That “….Kid” isn’t the best song here is testament merely to how good the rest is.

“The Good Life” decides to take us to the prohibition era in the 1920s, brilliant horns give it a feel of a juke joint that is blaring out righteously filthy jazz, this is followed by the laid back Southern Rock of “Last Ride Of The Sunset Men” – which gives the record it’s name in a narrated bit that appears – totally unexpectedly.

The whole thing seems to revel in following you, lulling you into a sense of security then taking a left turn, “Black Crow” for example, is as traditional a folk song as you can imagine, before the absolute gem in this considerable crown, “Monkey’s With Money And Guns” which sounds like something off a Little Steven solo album before Chris Buck (from the mighty Buck And Evans) rips a solo out from somewhere.

“Point The Way” deals with the confusion of life. Ok, so do a million songs, but none (that I know anyway) start in a coffee shop in Kazakhstan and sound something like a cross between a Bob Dylan talking blues tune and an AOR ballad. And I’ll just leave the line: “can anybody, anywhere figure women out at all…..?” here without comment.

“Deep Water” decides what this record has lacked is a dollop of soul, so gives it one, “Kelly’s Gone”, with its country tones, is the happiest break-up song in the world. Ever. And if the use of horns has informed this quite a bit, then never better than on “Something I Picked Up Along the Way”, on which Andrew Griffiths (who plays them all, apparently) excels himself.

The sheer breadth of this is astonishing. “Seven Bells” is an incredible folky yarn that had me reaching for a Mark Knopfler reference, and if – as Vaughn teases – “Which are truths and which are fables? “I’ll leave that to the listener…” says Danny. “All three storytypes can be found. I’ll leave it to you to work out which is which…” then I am prepared to bet him that the last one – the beautiful acoustic ballad “What You Left Behind” is the most personal one there is. And for once on this record, I reckon I am right.

These 14 songs are ones Vaughn, by his own admission, has written for various projects and “never found a home for” – and that’s the absolute genius here (not too strong a word, either), they don’t follow a formula, they don’t need to. They just sound utterly magnificent. That, well that, is no lie.