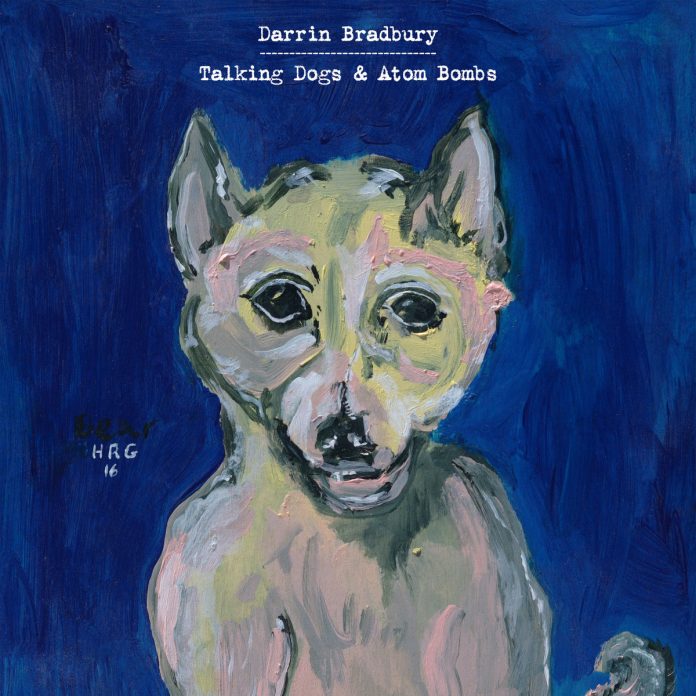 Notwithstanding the fact I believe that rock n roll achieved perfection the very second Slash’s guitar solo at the start of “Paradise City” kicks in, I am a lyrics man.

That is to say, what excites me about music isn’t the music itself – generally speaking – but rather the way the language is used and what the artist is trying to say.

Now, the very title of Darrin Bradbury’s new album – his first for his new label – is enough to pique the interest. “Talking Dogs And Atom Bombs”, well that’s got to be interesting, right?

The 11 songs that are contained on it, are unlike anything else. You can’t really say that you haven’t heard anything like it before, because you have. It veers between classic sounding singer/songwriter stuff, classic country and Americana, and does so admirably. Indeed, musically it is rather similar to labelmate Jeremy Ivey (Ivey’s wife Margot Price appears here too) but there are frequent moments here that are amongst the most original takes on things anywhere.

Rather like The Hold Steady, you are going to either “get it” or not. And that will largely inform whether you like this or don’t.

Here goes. If you think a song called “Breakfast” should begin with a rumination on whether a pair of squirrels are lovers, then should see the protagonist declare himself “the god of cereal town” before its through, then Darrin’s your boy.

Or if you think a song called “The American Life” should have as a first verse “The American life is French Fries, flags and hot dogs. And decorative explosions on mutually agreed upon days. In the cold fourth quarter, the family goes to the shopping mall, because in America, we buy our blues away.” Then you need to investigate.

The key phrase in all that, actually, is “the blues”, because much of this record appears to be written from the standpoint of Bradbury suffering with depression and looking to leave that behind one way or another.

From the title track, wherein his pets look down on him, to “Hell’s More Or Less The Same” which deals with the aftermath of a cocaine-fuelled party, to the wonderfully morose “The Trouble With Time”, it all has something interesting to say, some angle that you wouldn’t think of.

Less than half an hour long, because as the man himself puts it: “If I’m not motivated to say anything more about this particular thing, I won’t force it. I would rather have a minute-and-a-half song that I felt conveyed something unique.” And that certainly applies to “Stage Bird”, as the feathered friend wants to find Judas Priest and Crack, all in 78 seconds. Punk bands, eat that.

“Nothing Much”, which is rather matter of fact in its assertion that “I am waiting for the medicine to ease my pain”, “This Too Shall Pass” (next line, “albeit like a kidney stone”) and “So Many Ways To Die (Frozen Pizza)” all come from the “I never expected that” school of songwriting and if a record can have a plot twist then this one has them.

It’s the asides, the knowing glances to camera if you like, on “Motel Room, Motel Room” there’s the glorious “[the room] smells of Lysol and sex,” before he adds “the sex was not mine, I am sitting here watching the TV set….”

The last one, “Dallas 1963” ends things on a lugubrious, piano driven note, but not before it has helpfully offered, “wait a minute baby, you know you ain’t Lee Harvey Oswald”. How does it get there? Listen to it to find out.

In fact, whatever you do, just listen to it. Because “Talking Dog’s And Atom Bombs” is brilliant.