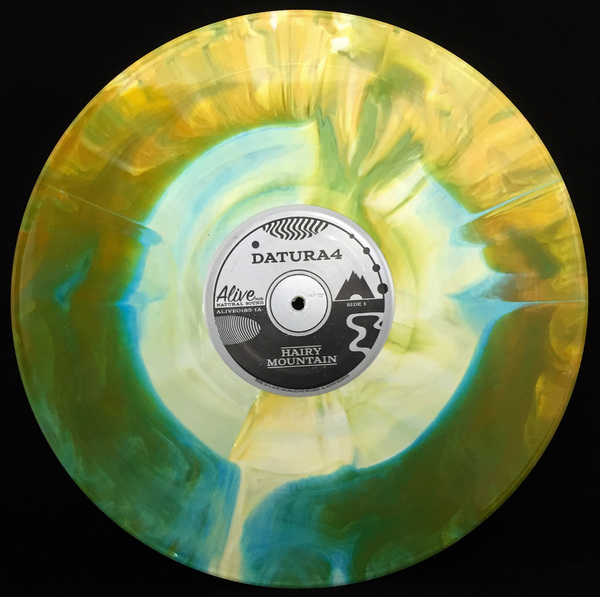 In the summer of last year, some Mp3s arrived at MV Towers from the Alive Naturalsound stable. Like when you were a kid you always knew that the red and white Atlantic spine was the mark of a great record, then reviewing as we do now, you always think “oh this might be cool” when it comes from certain labels.

This was from a band called Datura4, who had emerged from Aussie pop heroes DM3 and featured members of You Am I (a band who we’d loved back at the turn of the century) Datura4 dealt in classic rock and the album was a triumph. MV waxed lyrical on the subject and as well as calling “Demon Blues” amongst other things “spectacular”, we said it was “kind of a cross between chilled out Psych rock, blues and fuzzy 1960s garage rock n roll.

Now, perhaps in the spirit of those classic rock forefathers, just over 12 months later comes “Hairy Mountain” and, it too is a triumph.

One that sort of belongs to the same hinterland as the debut, certainly the fuzzy bliss of opener “Fools Gold Rush” and the knowing 60s harmonies of the verse are a suggestion that this is another labour of love.  That said “….Mountain” does move things into a more modern arena this time around.

“Trolls” is a seething damnation of keyboard warriors and social media, while “Uphill Climb” pulses and throbs over a confident beat and fine chorus.

“Mary Carroll Park” is a rather gleeful surprise too. Equal parts bluesy fun and barroom shuffle, it also features a guitar line worthy of that Aussie band that Axl Rose now fronts. There is joyfulness in its tale of lost youth too.

The title track, would – if it came from the LA Desert – be called a “stoner” song (this is probably more literal than usual given that at one-point singer Dom Mariani, once of The Stems, is looking for a “chief to smoke the peace pipe” with) whatever, it is a big, thick fuzzy piece of gloriousness.

The blues infused “Greedy World” is another highlight too, and you’d love to think that the subject of its ire was the evils of Rupert Murdoch (“I’ve got my own newspaper, and my very own page three girl”) but then it is probably the only song in history to use the words “monkey chauffeur” so it is won either way.

Musically, at least, the air of innocence that Datura4 manage is something to behold. “Confide In Me” is timeless rock n roll, “Too Much (Or Not Enough)” is a wonderfully catchy affair, while “Something To Hide” just about restrains itself from being a full on screeching thing, preferring to add some hand-claps instead, as the ear for melody takes a firm grip.

Things end as they began, with a song straight out of the late 1960s, early 1970s. But unlike the opener, “Broken Path” does it with a countrified acoustic strum and is looking up at the stars.

Another superb record from Datura4, and one which poses the very real question, of what the hell happens on a Hairy Mountain. It might be best not to ask. Listen to this instead. It’s probably safer.