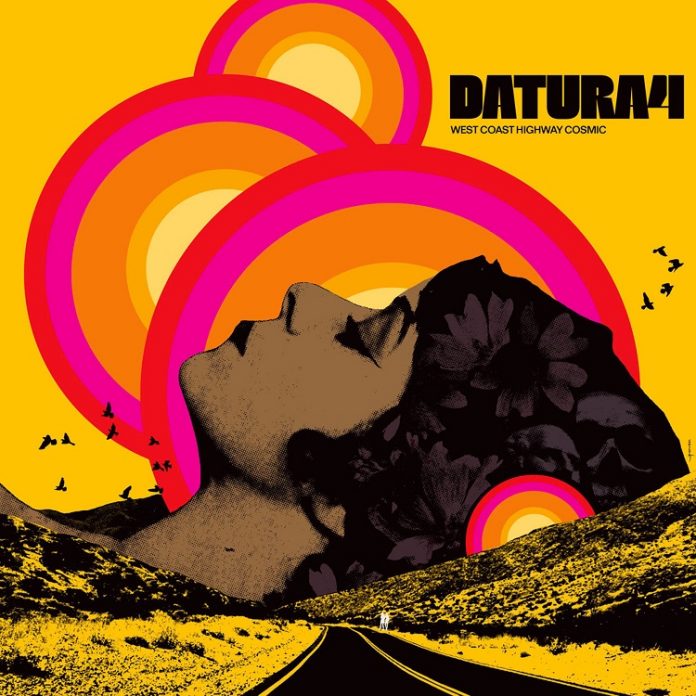 Everything about Datura4 screams “throwback”. The album covers they have, the sound, but there’s something else too. Their work ethic.

It always strikes me when you read those histories of rock n roll and so forth, an album a year was normal, a couple in a year wasn’t unheard of either.

Datura4 are bringing it back. “West Coast Highway Cosmic” Is the fourth album from the Western Australian mob in five years, and if broadly speaking, it comes from the same place, there are some subtle differences this time around.

It is a more natural growth, an evolution, if you like, and I’ll still stick by what I wrote in my review for their 2019 “Blessed Is The Boogie” record: “Datura4 are one of those bands. One of those bands that, you’ll know in the space of the first 45 seconds of the opening riff whether you like them or not.”

“West Coast Highway Cosmic” begins with its title track, but crucially it begins too, with a pair of swirling, sort of psychedelic, tangled epics. “…Cosmic” wraps itself around some glorious fuzzy riffing, but crucially, some brilliant organ. And the idea, really, that the 21st century hasn’t happened (and frankly, who can’t get down with that?)

It’s tempting to think that the four are still on their way home from a festival in the Australian Outback in the 1960s, that they all dropped acid and never came home, and such is the laid-back harmonica driven slice of brilliance that is “Wolfman Woogie” that you can actually believe it.

However, the fact that those two take 13 of the record’s just over 40 minutes probably gives a clue to the fact that the rest are a lot more immediate and in your face. There’s an urgency to the pounding of Stu Loasby’s bass and the Zeppelin-esque riff of “Mother Medusa”. Although the lyrics are a trip, still, this one rocks hard.

“…Cosmic” is also perhaps the most overtly blues of the four records they’ve released. “A Darker Shade Of Brown” has a kind of foreboding about it, while the swampy, delta lick of “You’re The Only One”, broods a bit more and its acoustics add a real nuance. “Rule My World” though, goes full on Bonamassa, if you will, there’s a real Robin Trower thing going on in the simple boogie too. Blues with the spit and sawdust left in, those three are in many ways, the end of Act 2 here.

Act three, then, if we are going to carry on torturing the motif, starts with “Give”, with just a little hint of “Rockin’ In The Free World” and its driving energy, and things get a little more primal and a bit sexy on “You Be The Fool” and if there aren’t many hints elsewhere that Dom Mariani is seen as a legend for his spell in the garage punks The Stems, then the piano led brilliance of “Get Out” is a nod to that. Not too hard to imagine the 70s Elton John doing this, either. It is the best thing here.

“Evil People” rather neatly bookends the record, by having the same epic, psychedelic vibes as the opening pair, but the thought that anything could happen is best shown by the crushing guitars that come out of nowhere seemingly, at one point and shake the everything to the core in the kind of way you wish Rival Sons still did.

Datura4 are a wonderful band, one that you suspect, given half the chance would be off down all kinds of Govt Mule type rabbit holes, but one that always remembers the song is king. “West Coast Highway Cosmic” is a case in point, it is a journey down roads you recognise, but it still manages to reach for the universe beyond.