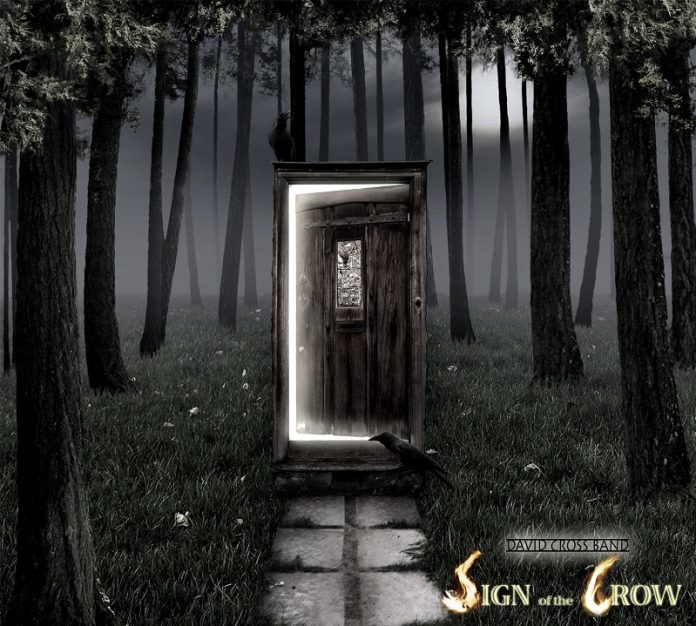 I must admit that I had no idea who The David Cross band were, let alone who David Cross was when I was offered this album to review. A bit of research and yeah he was an integral part of 1970`s King Crimson. He is the electric violinist who played on the Crimson classics “Larks Tongues in Aspic” and “Starless and Bible Black.” So well worth a listen I thought.
I had some preconceived ideas as to what to expect but let me say I soon had to put them to one side.

The opening track “Starfall” is a terrific introduction and a wonderful slice of almost classic rock. I was overwhelmed at the musicianship on this track and indeed the others to follow. Mr Cross has unearthed a terrific vocalist in the form of Jinian Wilde, whose vocal range is extraordinary.
The title track “Sign of the Crow” is more of the same but venturing into a heavier progressive rock jam with Jinian`s vocals chipping in at times throughout. “Crowd Surfing” is again a fast paced prog rock piece highlighting the talents of the band.
“The Pool” is a breathtaking ballad type offering. Paul Clark’s guitar has to be seen to be heard, wonderfully understated. David Cross Violin saunters over the top backed up by a solid foundation laid down by Mick Paul’s bass and Craig Blundell’s drumming.

The main man gets to showcase his wonderful violin musicianship on the instrumental “Raintwist.”A spooky, slightly unnerving but enjoyable musical interlude.
“Spiderboy” shakes us back to life and is a real eclectic piece, venturing off in all sorts of directions.  The track at times encompasses free jazz before heading back into a more straight forward progressive rock feel. The following piece “Mumbo Jumbo” is a little more difficult to describe, incorporating elements of jazz, classic and heavy rock.
The penultimate track “Water on the Flame” is again another superb instrumental that had me drifting off, almost out of myself at times. A splendid melodious piece to reflect on.

“Rain Rain” is a delightful track to end on. Showcasing all the elements of this wonderful band, superb vocals, dramatic interludes and above all wonderful musicianship.

A mention must go out to Alex Hall whose excellent Keyboard skills were shared on a few of the tracks and to Richard Palmer-James, one time King Crimson songwriter whose lyrics are best summed up by Mr Cross himself in the following statement “There are strong binary images within the album: darkness/light, right/wrong, heaven/hell, fire/water and recurring themes: shadow, sunset, travelling, strangers, kindness.”
This is a cracking album with wonderful lyrics, musicianship and outstanding vocals and it could have so easily passed me by.
I was fortunate enough to receive this offering in time to allow me to witness this band in a live setting and can promise you that these guys can really cut it.