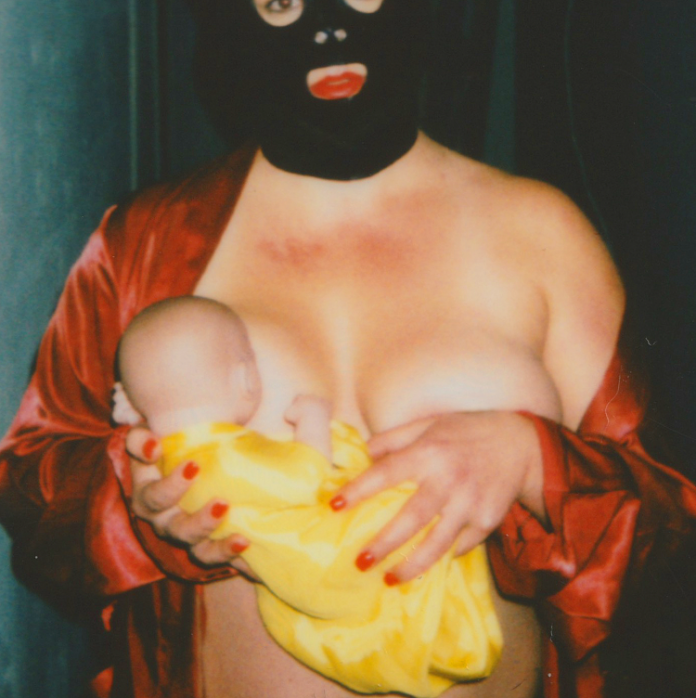 Here are some facts about Dboy. We’ll get into the rest of it in a bit.

1)As far as I can tell, there are three of them.

2) They appear to be permanently in gimp masks and silk scarves.

3) They are from Canada

4) There are 12 songs here and the thing takes about 18 minutes.

And that’s it. The rest is open to interpretation.

So here’s mine: Dboy rule.

Even Google, though isn’t sure what they are. Claiming they are a hip-hop band. They aren’t. Not unless Lil Wayne or somebody (down with the kids, me, I know my rap innit…) races through the first four songs on his album in about two minutes and opens for Cancer Bats.

Nope. Dboy are punk rock, baby. And what’s more they are fast furious and strangely filthy. Actually, no just strange. And filthy.  “Why do you only luv a Dboy (who’s down?” is an hell of an opening statement, and it never lets up.

“Thumblless” is typical of many here (all of them, in fairness) where it just sounds like a load of slogans being shouted at you while some furious, dirty rock n roll is being played. To wit: “Now you’re thumbless, baby. Come on, give the Dboy a hand.”

If I absolutely had to convince someone as to the skill here, you’d probably start with “Gimps Don’t Limp”,  there is only 32 seconds of it, that’s true, but it tells you all you need to know. First there’s this: “Don’t need no scumbag culture reject telling us he things we’re cool… we’re cool, baby.” And the fact that in those 32 seconds it is absolutely a proper “song” if you will.

Look at that line again. Dboy do not care what you, me or anyone else thinks about them. You are with them, or against them and there is no in-between.

That sort of sums up the album too. There will be no middle ground. You are either going to join The Order Of The Dboy Scouts – genuinely they have a fan movement called that – or think this the biggest pile of crap you’ve ever heard. But then, a reaction either way is all this is about.

“Red Ultraglide” – over two minutes so damn near prog rock – is another statement, “Dboy Sells Out” attacks those that don’t DIY. Whatever it is. “Scavenger Of Luv” starts with a riff not heard since Billy Bragg was in riff raff, “Money Talks” has a real glee about the noise it makes, and sounds like they’re all sniffin’ glue and “Full On” likes the idea so much it essentially does it again.

“Hips” with its primal bass rumble, is a different texture, but then, the best thing this has to offer comes into view. “White Denim” is a marvellous thing. It has this as a line: “Take the cash and walk away, don’t be a slave to things that don’t arouse you, baby. And I am just a slave to my white denim”.

And while you are living for pleasure alone then “Love Will Always Find You In The End”. And remember, as the last words on the record say: “You kiss the boy, and you keep those white jeans tight.”

Look, I am too old for be a Dboy Scout – I am not even sure I’d qualify for the badges as a world of hedonism and self-discovery isn’t really one I explore too often, but even if you strip away all of that, “New Records In Human Power” is an absolutely brilliant punk rock album.

Just remember, though, if Dboy come and live down your road you might want to consider moving out.