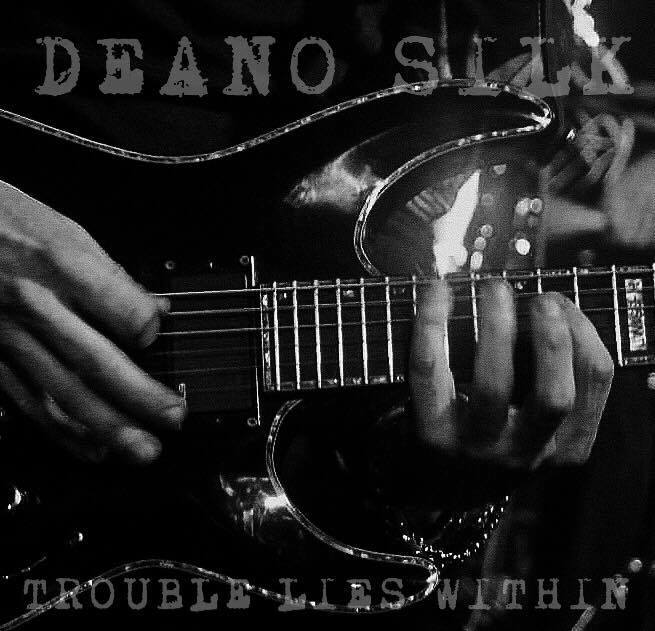 Yorkshire based rockers Jupiter Falls got the MV seal of approval a couple of years ago when they released their debut record (and look out for a review of album number two imminently).

In the meantime, along comes this new EP from their guitarist Deano Silk, who has roped in JF singer James Hart and drummer James Hatfield to help him.

And – if you thought that Jupiter Falls were diverse, then on “Trouble Lies Within”, Silk has managed to find an even heavier edge.

Five  tracks with a more traditional metal hue than you might expect given the understated opening to “Brand New Me” which chugs along initially before cutting loose and really opening its shoulders in the chorus.

Silk is a formidable guitarist, and he sets about proving this on the epic “Hands Of A Broken Man” which is sort of like Bruce Dickinson’s solo records circa “Tears Of A Dragon.” It knows it’s way around Maiden’s “Seventh Son….” period too, but then, shouldn’t all great metal?

The title track, which opens with some genuine foreboding, soon becomes a very British piece of slice of music, throbbing, pulsing and sounding huge with Hart excelling himself too.

This is, though a varied work and “Dirty Dancer” has a touch of Nightwish bombast about it, which makes the down and, well, dirty chorus, something of a surprise, but it all works, as everything does here.

“Keeper” is different again, ushering itself in on the back of some Power Metal stylings, which combine with Silk’s fine six string work to fine affect.

If you are familiar with his main band then you will already know how good Deano Silk is. Even if you aren’t, and you just want to hear some mighty – and mighty fine – British heavy metal, then “Trouble Lies Within” deserves your attention.