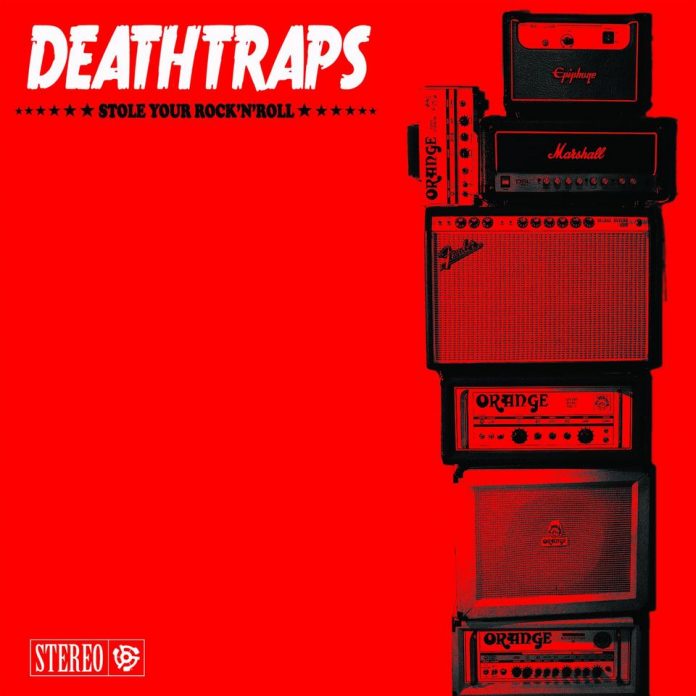 “The Deathtraps stole your rock n roll and played it much better than you.” They sing on the title track here.

Look, 20 seconds into “Let’s Fall Out Of Love” you’ll know. You’ll either love this or hate it. If you love scuzzy, nasty stuff, then this is for you.

“Fuck The Cool Kids” (opening line: “I don’t want to go to heaven, cos none of my friends are there) is music for people that always preferred Razzle’s Readers Wives to Playboy. Forget the glamour, give us the dirt.

“Devil And Me” and the even better “Bad Things” (basically just a bloke yelling “I want bad things to happen to you” for about two minutes over a hi-octane punk riff) do the type of sloganeering I’d vote for, and lets be honest, everyone here knows the debt that “Bloodshots” owes to Motorhead. No one is apologising.

“Too Fast To Last” wants to be punk in about 1977, and I am guessing here (reckon I am right too) that they are all pissed off by being in covers bands and “Play The One We Know” is the result.

“Backstabbing For Beginners” with its Backyard Babies-isms is the best of the lot, although “Tastes Like Blood” isn’t far behind and “Joan Jett” actually mentions Cherie Currie – which brings back memories of the worst gig I’ve ever seen, where the Cherry Bomb herself sang two songs, her voice went and she spent the rest of the night getting audience members to sing the tunes instead. This is not a joke.

“The Patron St Of Emptiness” is a party song for the nihilists, and it’ll deal with hangovers, thank you. It also ends a record that is like finding a week old grape at the bottom of your bag. You know you shouldn’t eat it, but crikey its tasty.

To be perfectly honest this is a band that I’d love to be in. But I’m too scared. If they moved next door then your Council Tax goes down. It’s as simple as that. They are also totally wonderful. And why? Simple, baby. They play the music they want to.

On the aforementioned title song, there’s a line that it seems to me sums the band better than anything in these 500 and odd words I’ve put together does. “You’ve heard it all before, but who cares? Do you care?” They don’t. They’ve got the same records as you. And neither should you. Because The Deathtraps have taken rock n roll from the safe, from the anodyne, from the homogenised shitty bands.

And they aren’t giving it back. So you might as well get on board. You probably want to avoid their van, though, Satan alone knows what you’d find on there.

The album, though, is phenomenal. This my friends, is what excitement sounds like.