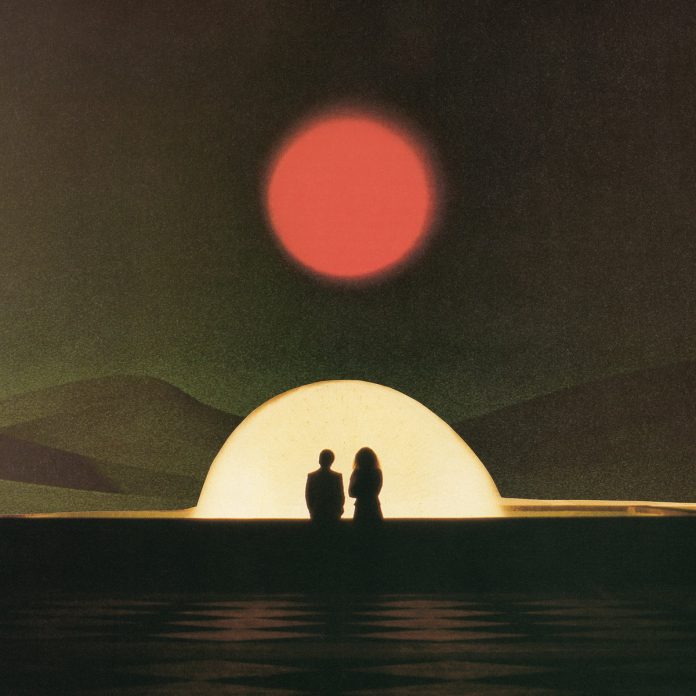 I`d never heard of the band Deep Sea Diver. They are fronted by Jessica Dobson, formerly the lead guitarist for Beck and The Shins, and also known for her work with Conor Oberst, Yeah Yeah Yeahs and Spoon. Jessica is a vocalist / multi-instrumentalist, whose bandmates include her husband Peter Mansen (drums), Garrett Gue (bass), and Elliot Jackson (guitar, synth). Their third album “Impossible Weight” is released this month and includes a collaboration with Sharon Van Etten. I always enjoy what inspires or drives these artists when writing material for an album. After twelve months of touring with Wilco, Jessica entered a period of self-analysis and found herself detached from making music, and unable to find joy in it. She focused on dealing with the depression she’d been struggling with, and soon started volunteering for Aurora Commons (a drop-in centre for unhoused people, most of whom were drug-dependent and engaged in street-survival-based sex work.

The album opens with `Shattering The Hourglass` a quite intense piece initially that builds as it proceeds along with just synth keys and vocals before it opens to incorporate drums, more flowing synth swathes and some sweet harmonies. The song was written about how everyone’s facing some kind of battle, and how we could all talk more openly about these things. It was written the same week Jessica`s friend and former bandmate Richard Swift was spending his last days in a hospice because of complications from alcoholism. We enjoy a much faster paced but delightful piece with `Lights Out` a song that seems to relate to a feeling of groping in the darkness of depression and searching for help to overcome or get out of it. The recognition of this situation possibly led to a song that is quite airy and bright and has some stunning guitar chords throughout.

`Wishing` was written after viewing a documentary on Nina Simone about her physically and emotionally abusive relationship with her husband. The singer said it made her “think about the idea of being under the thumb of someone else, and not knowing how to get in control of your life again. I have a tendency to try to resolve the narrative by the time I get to the end of the song, but for this one I didn’t, which felt right, because that’s what life is like”. The song enjoys a dreamy listless feel which is an apt setting for this unhappy scenario. Title track `Impossible Weight` is a collaboration with indie folk / rock singer songwriter Sharon Van Etten and is a really joyous offering. The addition of Van Etten`s vocals are a touch of brilliance as she really enhances the song rather that divert any attention away from it. It would seem like the impossible weight is the thought of letting people down. The guitar riffs and accompanying drumming are a joy to behold in this wonderful slice of indie rock.

`Switchblade` is led by a piano and Jessica`s vocals which really express the air of desolation and unease shared in the subject matter. There`s a more expansive feel about `Hurricane` a song written about an abusive relationship and the title possibly a metaphor or not for the devastation of depressive episodes and their effects.

A track that was partly inspired by Christine Blasey Ford’s testimony against Judge Brett Kavanaugh and the collective trauma endured by women everywhere follows with `Eyes Are Red (Don’t Be Afraid) ` The repeated lines of “Don’t be afraid. Don’t be ashamed.” are extremely powerful and almost pushes the musical content to a supporting role. I felt `People Come People Go` was quite hypnotic with quite abstract lyrics that I felt were a bit beyond me.

`Lightning Bolts` is an energetic upbeat offering that sways back and forth and seems to relate to a relationship where it was felt they`d found their soulmate and now don`t want to face life alone. The album closes with `Run Away With Me` a stripped back piece with just acoustic guitar and vocals relaying very emotively a kindred spirit possibly who is going through similar trauma and asking them to run away together.

“Impossible Weight” is an extremely thought-provoking body of work that deals with mental health issues, a subject that affects one in four people in the world these days. I found it an compelling listen not only lyrically but musically as well and i`m sure it must have been very cathartic maybe cleansing not only Jessica but the band as well. A fascinating and rewarding introduction for me to this group.