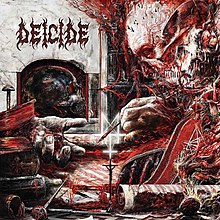 Death Metal standard-bearers return with uncompromising and punishing new release.  Is album number twelve the one to return the kings to their throne?

The Floridian Death Metal masters have returned.  Following up from the excellent old school vibe of In The Minds Of Evil in 2013.

Opening up with “One with Satan”, a full-paced tortured drag through the best that death metal has to offer.

As always Glen Benton’s lyrics veer on the darker side of religion and that’s they way it should be.  He’s still releasing that pent up frustration and anger over religion and damning it with every use of his forked tongue.  For Benton the absurdity of religion and it’s practitioners is a lyrical gift that never stops giving.

Musically, everything on this album has been tightened to the point of suffocation. It is claustrophobic in it’s relentless pressure from the razorsharp Slayer-like solos, to the pummelling drums and thunderous bassbeats.

“Crawled From The Shadows” is a bonafide stunner.  Right out of the top drawer marked Death Metal Classics. “Compliments of Christ” is damn near flawless. The same could be said for the ferocious  “Seal The Tomb Below”.  You get where this is going.

There are grooves and riffs to make even the most study churches crumble. Deicide have never sounded more relevant and intent than they do now.

You can tell that the band have spent a lot of time going through these tracks to make them as good as they could possibly be.  There is no fat on this album it is all raw metal muscle.  A number of the tracks on here are downright nasty, in a good way – a very good way in fact, and if there was any doubt about their claim to the darkened throne then this will put the usurpers back in their place.

If the devil has the best tunes then Glen Benton is the chief songwriter.  The band’s recent output has left some fans with mixed feelings but for fans of the band, who have been around since 1989, this album will find their blackened faith restored.  This is a new “Classic” Deicide.

This is an album that should the band reassert their dominance over the genre that they helped define.  Deicide have entered a whole new world of darkness and they will not be seeing light for some considerable time.

Overtures of Blasphemy is out now via Century Media.  Go get it.