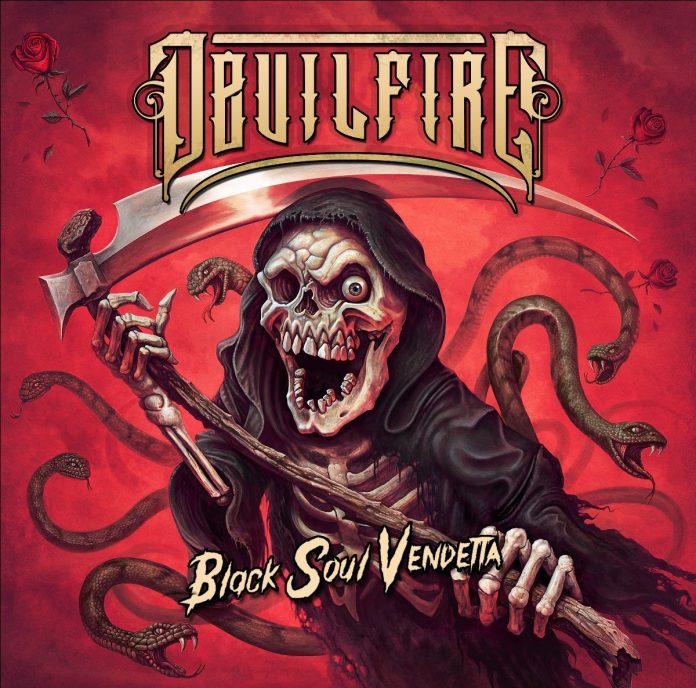 Oddly three years ago to almost the day, I reviewed a record called “Dark Manoeuvres” – the debut album by a band called Devilfire.

Everything seemed set for them to do massive things. It was, I wrote: “a snapshot of how a British band takes on arena rock.”

A few weeks before that, in late August 2017, I’d seen them play a hometown show, in Birmingham, as they effectively previewed the record, and it was that, really, that convinced this was a special group.

One with the belief – the bollocks let’s just say it – to play a headline set in their backyard with songs that no one knew, doesn’t grow on trees. The last time I saw them, opening for Ryan Roxie, the songs shone more, because this was an acoustic gig and only the very best music can translate into such a setting.

All of which is preamble to “Black Soul Vendetta”, so we’d best cut to the chase and say simply this: It is exceptionally good.

The best way to put it is this: The 13 songs here sound like a second album. That is to say that it sounds mature, comfortable, it takes what was excellent on the debut and hones it.

Take “Cruellest Animal”, the one that kicks it off. Like H.I.M would sound if they were from the UK industrial heartland, there’s a darkness here. Like its blood runs black, but there’s all the pomp and ceremony of a proper arena rock band.

That’s, in a nutshell anyway, the feeling throughout the rest of them too, because for all the this is a little more nightmarish than FM, say (and a bit more modern) then make no mistake about it, the keyboard and horns of stuff like “Chasing The Pain” is a melodic rocker that works on the premise, “don’t bore us, get to the chorus” and why not?

They worked with former Slash vocalist Eric Dover on that one, and “Dream Evil” – which shines and chugs like the very best – and that’s a measure perhaps, of the division they belong in. “Live A Lie”, underlines it, and does so in bold.

Main man Alex Cooper has always had talent, you don’t work with the people he has if you don’t, its just that in Devilfire he has a band with the ability to back up the vision. The twin guitar players Baz Blackett, and Keiran Topp deserve major credit for this, as they make this sound like a heavy metal record  – which it palpably isn’t, while the rhythm section of drummer James Downes and bass man Lars Wickett has a class too – the former especially on “Vendetta”.

Somewhere deep inside them there’s a sleaze band in about 1986. “Dead Man Walking” has a spot of Motley about it, but mostly they walk the path that would have been marked AOR back then. “Justify” is a superb, classy thing, “Sell My Soul” is even better. Swagger? You bet. And added harmony, just because.

Scanning the tracklist, I’d assumed “You’re Gonna Break My Heart” was going to be a ballad. It isn’t. It is, though, a fists in the air rocker that seemingly pulses with an energy, while those of us that grew up with “Slippery When Wet” need to get onto “What You Pay For” with an immediacy. The highlight, in my book, because its so damn catchy.

The thought that, with half a chance they’d be off down some Marilyn Manson-type rabbit hole is never too far away, and “Black Soul Bones” goes full on Wednesday 13th, and as ever there’s a whiff here that Devilfire aren’t quite the proof that nice boys do play rock n roll after all, as “Decadence” neatly proves. They turn it around, however, with “Wasn’t It Love”, which basically goes for the idea that “Alone” by Heart is just about the greatest ballad ever. Power ballads, baby. It’s all the rage in 2020.

It ends a record, that proves beyond any reasonable doubt that Devilfire are one of the finest of the “new breed” of UK rock. Right up there with Stone Broken, Those Damn Crows and the likes, “Black Soul Vendetta” is pretty much a nugget of solid gold.