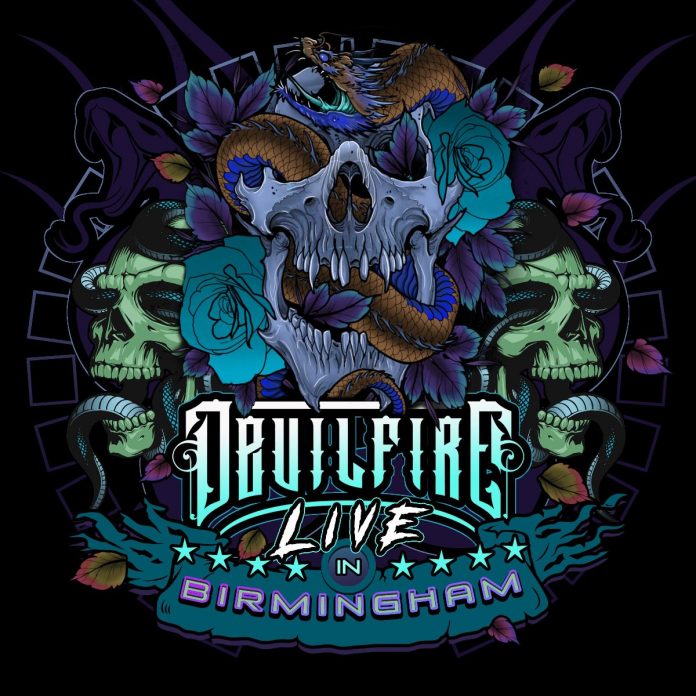 You know, when I read that Devilfire were releasing a six track live record of a show that they’d originally streamed on Facebook, the first word I thought was: lockdown.

A word that I didn’t even know (see also: furlough and “circuit breaker”) before about March this year and yet which is so ingrained in us right now it permeates everything.

In the case of “Live In Birmingham” though, I am only half right. See, this six tracker was actually streamed on Facebook in 2018 as an “in the studio” thing, to partly showcase the new Devilfire line-up (Dan Bate, ex Point Blank Fury and Absolva amongst others) had just joined, but also partly because the band were pissed off that everyone spent so long on their phones at gigs, that they were going to give them a gig to watch on their phone.

Now there’s a couple of things here, I don’t really get the “streaming” thing. I don’t have Facebook, for a start, and I haven’t watched one of these escapades since they became the in thing (or maybe the only thing?) in lockdown, so in many ways I am not the target market for such endeavours. Except for one issue. I really like Devilfire.

Goodness me, if ever there was a band that I can’t work out why they aren’t a proper player in UK Rock, its Alex and the lads. This 28 minutes proves it.

Made up of songs from their 2017 debut album, it is a showcase for everything that modern hard rock music should be, but so rarely is.

Whether it’s the chugging, melody of “A Thousand Times” – which I swear would have been a hit if FM had released it – or the sleazy energy of “(You Gotta) Revolution” (surely the only record made that wasn’t a gangster rap affair to use the word “mandem”?)  its all shot through with a genuine star quality.

“Kill Your Love” is fully loaded with a chorus that Bon Jovi would kill for, and there’s a kind of grandiose effortlessness to “God Gimme Vengeance” that stays just the right side of true pomp.

Occasionally with Devilfire  – who I’ve seen live both electric and unplugged – they show you that they are capable of switching gear. “She’s Like Fire” adds a touch of The Cult, while “Waiting For A Rockstar” doesn’t so much as appear, as kick the doors down, then stride the world.

Credit to Cooper, he clearly sees the inherent daftness, encouraging people to join in the singalong by commenting on the livestream broadcast (he even laughs when no one does!) and ultimately whilst this doesn’t need releasing (and wouldn’t be in normal times) its 2020 and all normality is over.

So a live album with no one in the crowd recorded two years ago, with six songs that were released in 2017? 2020, that.