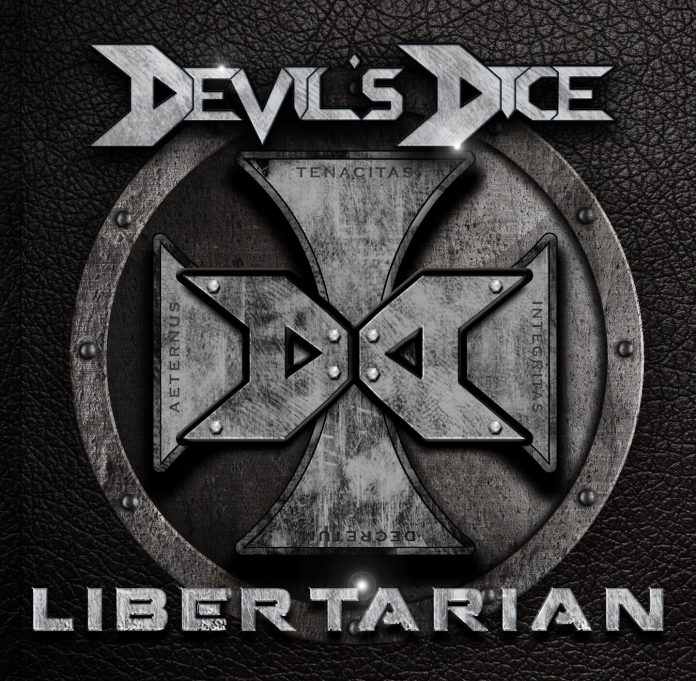 On the accompanying blurb for “Libertarian,” Devil’s Dice shed some light on just how difficult it’s been for them to get to the point of releasing this record at all.

As a brief précis, this’ll do. David Clark and Chris Webb started in 2005, they began recording this record in 2009 and in 2013 they finally found their singer. Small wonder, then, that on “Libertarian’s” opener, “Feed The Flames,” which charges out of the blocks as if it means business, they’ve constructed an us-against-them anthem: “Far too long in silence” is one of its lines. Indeed.

But back to this pesky vocalist situation. Matt Gore, the man they chose, is best known in Midlands Metal as the larger-than-life armour clad frontman in The Mighty Wraith, in Devil’s Dice he can turn away from the battling power metal to something that takes Maiden, Saxon and hints of early thrash as its starting point and wraps it up in a kind of twin guitar sound.

And, by the great God of Ronnie James Dio, these boys can write a chorus. If “Passive Resistance” doesn’t worm it’s way into your conscience and unpack it’s suitcase to stay, then there’s something wrong.

“I Walk Alone” – which is something in between Big Country’s “King Of Emotion” and Bon jovi on “7800 Degrees Fahrenheit” –  is a fists in the air anthem, “Forbidden Memory” is a big ol’ ballad, while the title track is might sound – to these ears at least – like it’s going to break into “Shot In The Dark” by Ozzy at any moment, but it’s superb.

“Chameleon (Right About You)” updates the sound a little, but largely there’s a real kind of 1980s metal feel here, best exemplified on the brilliant, screeching and downright vitriolic “The Grudge,” and the delightfully mid-paced “Destiny Calling.”

“A Matter Of Faith” gives the album a neat bookend to finish, “what’s left for me to prove?” Asks Gore, perhaps rhetorically, and you get the feeling this is a song about the band themselves.

The answer to the question, for what’s it’s worth, is nothing. On “Libertarian” Devil’s Dice have achieved all they wanted to – and you suspect, a little more besides. They don’t write em like this anymore apparently. Actually, that’s incorrect. Devil’s Dice do and they are damn good at it.