French retro-rockers get their brand of stoner groove on debut full length release with impressive results. 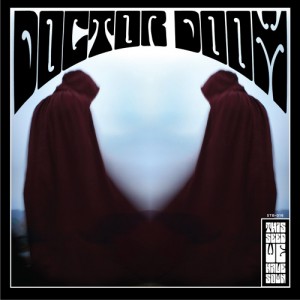 Fans of the Marvel comics will know Doctor Doom as the arch-nemesis of the The Fantastic Four and all round supervillain. Fans, however,  of heavy groove-laden progressive stoner shuffles will now point to a French quartet with a clock set on the late 1960’s to early 1970’s.

The band were formed in the French town of Ariège in the Midi-Pyrénées by vocalist/guitarist Jean-Laurent Pasquet and guitarist Jérémie Delattre in 2011. The line-up was completed by drummer Michel Marcq and bassist Sébastien Boutin. Since their inception they have built up a significant following and a crushing live reputation that has put them high on the ones-to-watch list. As many bands do they cut their teeth in the live arena via the use of cover songs. The usual suspects were accounted for in Deep Purple, Thin Lizzy etc but also bands like Coven were also a big inspiration. Almost inevitably you can hear the influence of those bands and more in their sound but crucially for a band wishing to set themselves apart they have their own take on matters pyschedelic. 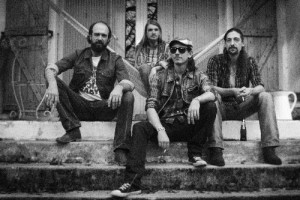 Bands like Witchcraft and Graveyard, amongst countless others, have emerged in recent years to blaze a new trail over old ground. DoctoR DooM fit nicely into the same mould but have some added flair, songwriting and showmanship that elevates them into the upper echleons of the third coming of stoner rock.

A debut EP was released in 2012 under the title of “DoomO” and the talent that was embryonic at the stage is now becoming fully formed.

“The Sun” is the first glimpse we get into the world of the DooM. A Sabbath-esque bass line introduces us to a spoken word passage before the track develops into a stoned-out version of 70’s glam rockers T.Rex.

Once the band get the momentum building tracks like “So Jinxed”, “Behind Your Shadow” & “Truth In The Dark” are almost impossible to stop. The rhythmic power and intensity that ‘DooM provide alongside moments of simmering Californian Sun make them an irresistible force, not only in the live environment but also on record.

The album finishes brilliantly with a one minute outro entitled “To Be Continued…” which is a perfect way to sum up the band and Maximum Volume for one cannot wait to hear what happens next.

This Seed We Have Sown will be released worldwide on 24th July 2015 on Ripple Music. Grab yourself a copy. Vive La France!!