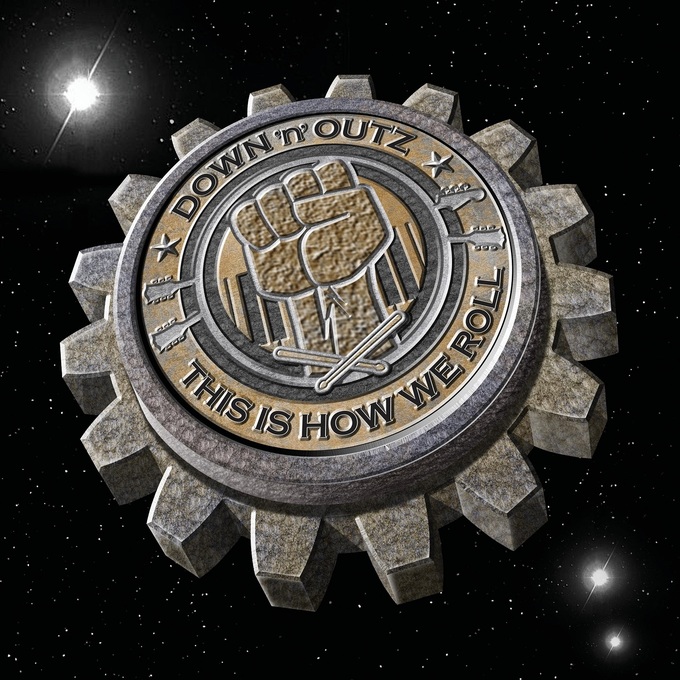 “Another Man’s War” is about 15 seconds old. It has done something in between the epic bit of “Won’t Get Fooled Again” and the pure unadulterated joy of “Goodbye Yellow Brick Road” and a thought enters my head.

“This Is How We Roll” has started with a Guy Griffin guitar solo and the pre-chorus has said: “so we can dance, but we got soul…..” and the thought is still there.

Then “Goodnight Mr. Jones” has been on. A simply gorgeous song about the passing of David Bowie and what his work meant to the person singing here, but also to countless millions. Special mention for one of the most beautiful lines about death that I’ve ever heard: “the stars have your spirit, the earth has your flesh and your bones,” isn’t just about Bowie, its about grief and is just about the best song I’ve heard this year.

Heroes – if you’ll permit an obvious Bowie link – are powerful things, and they are what Down N’ Outz are about.

Four brilliant musicians, including heroes of mine, joining together to pay homage to heroes of their’s as it were. They were, of course, a covers band, put together by Joe Elliot to support Mott The Hoople, and they were good fun.

Thing is, people like Elliott, Guy Griffin (and without his band, The Quireboys my life would have been very different) Share Ross, from Vixen but who gets massive bonus points for being once of Dogs D’Amour, and Phil Martini (currently in the mighty Wayward Sons)  don’t want to cover, they need to create.

So this one is different to the other two. This has 11 new tracks – penned by Elliott (and with the greatest respect to Def Leppard who are ace at what they do, he sounds incredible alive here, enthused, re-energised) and just one cover The Tubes’ “White Punks On Dope”.

And so good is this that thought won’t go away: that of, why on earth didn’t they do this before.

Because “This Is How We Roll” is stunningly good, it really really is.

Just like there should be, there are elements of what they love here. The chance taking, barminess of Queen on “Creatures” which is so jaunty it should be a Christmas song to be fair, “Last Man Standing”, certainly in the harmonies anyway, recalls those 10CC records of my parents that I listened to a lot, and the strings are pure ELO. It is brilliant.

The one remaining member of the band that I haven’t mentioned yet, is actually (arguably at least) the most pivotal to the sound. Keith Weir – like Griffin a Quireboy – and his piano elevate this to stratospheric parts. “Boys Don’t Cry” is probably the most Def Leppard sounding thing here, but thanks to the piano it sounds like the Leps are jamming in the bar.

What this time away from the day jobs does, of course, is allows a creativity that the expectations of their other bands would not. Certainly, nothing they are in elsewhere would suit the gospel tinged slow building “Walking To Babylon”, but this still feels like a “proper” band as it were, and “Let It Shine” a real Elton John type one is proof of that.

It all adds up to one of the more pleasant surprises anywhere in 2019. “This Is How We Roll” is a collection that not only pays fine homage to their influences, but adds to the musical legacy of all concerned. And that is no mean feat.