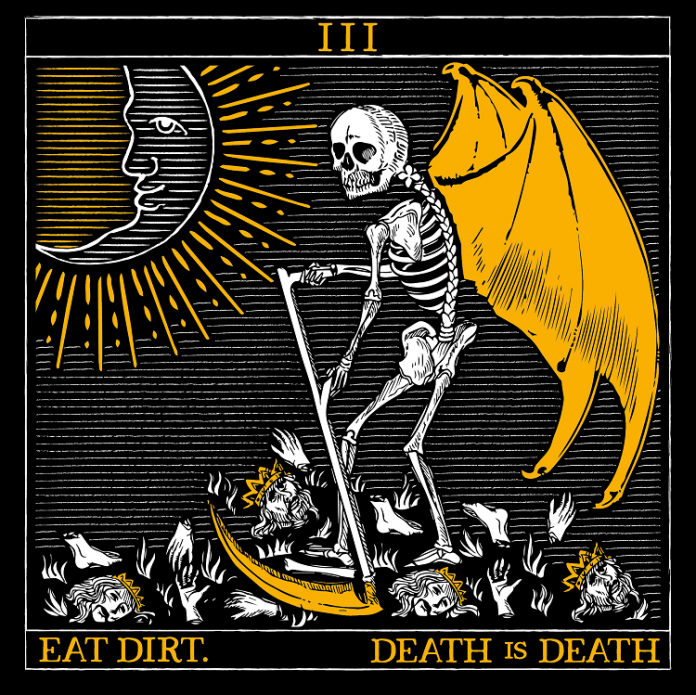 You’d do well to heed the words at the start of the title track here: “Ready,” says a woman’s voice, “you’re tough enough. Let’s go.”

That’s actually the fifth song, but still. Only the very strongest need sign on for this ride. Nihilism hangs in the air. The palpable sense that there is no light at the end of the tunnel. Happy endings are for fairy stories.

That might be true, but if you think that concept records are for prog rockers, then you can think again. Eat Dirt. Are here to change preconceptions.

Don’t believe me? This is what the band themselves say about “Death Is Death.”

“The album covers a lot of stuff, but it is mainly about death,” admits vocalist Ben Mills.”The lyrics are mostly rooted in the fear of death, the acceptance of it, and coming to terms with the death of friends and family. It all came together quite strangely, we never went out of our way to write a concept album. It just…happened.”

And when I say “change preconceptions” what I actually mean is batter them into submission. 14 songs. 24 minutes. This is a study in focussed rage.

“Make Peace” sounds like it would rather make war in truth. “A walking contradiction, in perpetual misery” shouts Mills, and that type of sloganeering rather neatly sums things up.

Musically, to be fair, this just does it faster and angrier than anything else. You can chuck in names like The Bronx, if you like, maybe a hint of Every Time I Die, but even when they throttle back a touch for “Come And See”, it’s so they can offer the thought that “the Devil and God are raging in me” and maybe in so doing they hit the nail on the head as to the conflict within most of us.

That one has a guitar solo, and is one of the few over two minutes long, “Moribund” – which contrary to its title bristles with life and swims in a kind of Cancer Bats pool – exists on groove, feeling and a seething. That’s what Eat Dirt. (the full stop seems to be in their band name and maybe exemplifies some kind of finality?) do.

“Death Is Death” thows everything to the wall and doesn’t care what sticks, “Punk Rock Con” – which starts with a riff that is like “Black Betty” turned up to insane degrees – rails against the fake and is arguably the best of the lot, “Dog” has a bark and a bite, and snarls like you wouldn’t believe. But the lyrics here are thought-provoking: “seven billion souls, always connected, now we’re divided” does resonate in these social media driven times.

“Night Terrors” has a more melodic hook than most, “The Beast” is an almost hard rock thing – at least to start with – and “Bones” broods with a real menace, the chorus here, though, is more nuanced than many.

“Out Of The Fire” is like a London take on Hatebreed, and there’s a real gang feel about this too. Oh and if ever there was a record that you wouldn’t think would have a track on called “Ballad” its this one. It does though and, well, it’s not one.

“Spend Your Life” is interesting too. “Put up or shut up” is a phrase that has never sounded more threatening than it does here, while “Pull Out” which ends this in something of a hail of bullets offers the suggestion that: “I bet you thought you’d never live like this…..”

And you didn’t, did you?

That said, the only thing certain in life is death. This is your primal scream therapy.