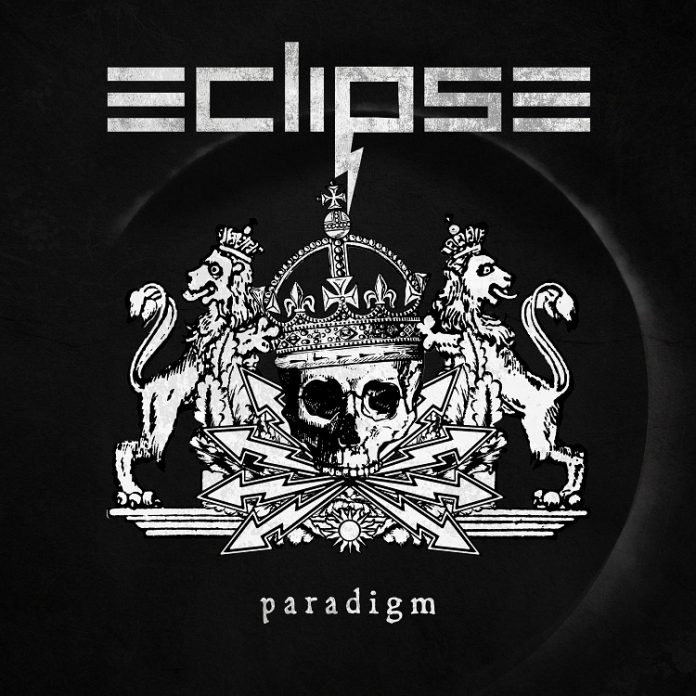 “I write things for me, I don’t care if anyone reads them.” Anyone who does anything creative, whether it be writing a song, a play, a poem, a review, whatever, has said that. And what’s more, it is bollocks.

We all want to be Jon Landau and say see a kid play for the first time and say: “I have seen rock n roll future and it’s name is Bruce Springsteen” or the equivalent, or coin a term like NWOBHM for a “movement” like Sounds Magazine (first used by Geoff Barton, it was dreamt up by his editor, I think?)

So, if you will permit me, I am going to have a go at it: Pow-aor Metal.

There is, so far as I can tell, no other way to describe “Paradigm” and, ok, I guess I am not the first person to say it , given they have been making records for almost 20 years. That said this record is power metal, but not as you know it, baby.

The opener sort of is genuine power metal, actually. “Viva La Victoria” is a cracker of a kick off. Playlisted everywhere right now and you can see why, but it is best thought of as Sabaton’s Eurovision entry. That, though is, eclipsed (as it were) by the quite brilliant second track here. “Mary Leigh” is the type of rock that Joey Tempest would have got a gold disc for in 1986, and its precisely when the solo hits at one minute and 52 seconds into this, that it stops being a power metal record. Listen to what Erik Mårtensson does here and this is as pure hard rock as you can conceive.

The rest of it basically follows the same pattern. Somewhere between the good kind of Bon Jovi and Hammerfall. It shouldn’t work, but goodness me, this is a fabulous record.

“Blood Wants Blood” sounds like it is a Wednesday 13 title, but it does its thing with class. “Shelter Me” (which isn’t a Cinderella cover much to my disappointment) wakes you from your reverie with lyrics that jar: “There will be nights wishing you were dead, when all your devils are bleeding red” sings Mårtensson and you do kind of go “blimey, I never expected that here”.

“United” is as anthemic as its Priest namesake but adds a hint or two of folk that not many of the others do. But don’t fret. Them fists are going up in the air before it is done and my notes for “Delirious” simply said this: “big old rocker, you know it is going to rule when it hits.” It does. And I’ll stick by both statements.

The closing solo for “When The Winter Ends” – and the fact Eclipse have a second guitarist in  Magnus Henriksson gives them a harder edge – is worth listening to the record for alone, while “38 or 44” with its pounding drums from Philip Crusner rather underlines there is a harder edge here than most bands like this posses.

“Never Gonna Be Like You” could almost be their o anthem, given that isn’t quite like any other band of this type, yet is thrillingly familiar too. It is a neat trick which takes skill to pull off.

“The Masquerade” in many ways, is the pinnacle here. So massive does it sound that you want it to have a video filmed on a mountain top, in the desert, with a mane of going everywhere -and there is more than a hint of “Radio Ga Ga” in the drum pattern too. Notwithstanding all the above, though, the last one “Take Me Home” is somewhere beyond “big” in scope and up towards “gargantuan”. The last time anything flew this high was The Starship Enterprise.

There is a feeling on “….Home” that they are returning as conquering heroes. What they have been fighting for, in truth is probably nothing more and nothing less than heavy metal.

Whatever. They’ve won. They’ve got the spoils. “Paradigm” is beyond victorious. It has scorched the earth with its pow-aor.