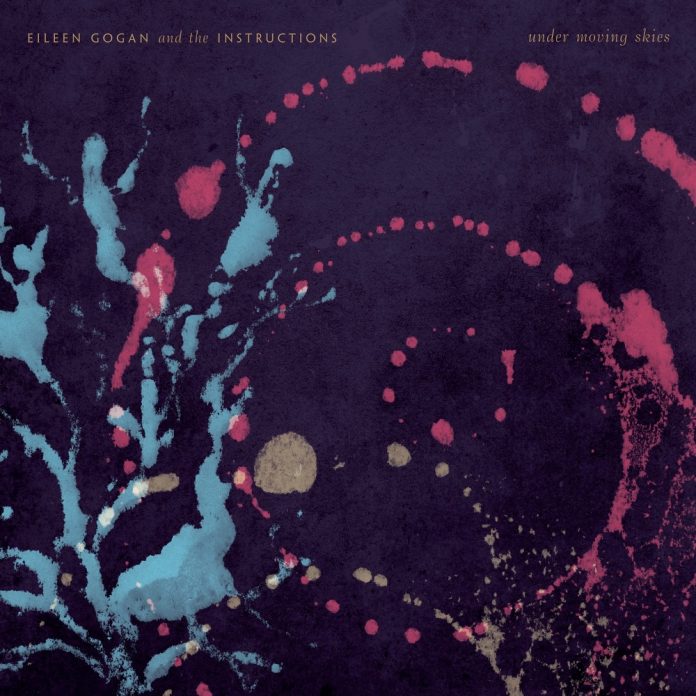 Dublin based singer-songwriter Eileen Gogan has sung with some of Ireland`s finest bands The Would Be`s, The Revenants, The Drays and performed with Microdisney at their 2018-19 reunion concerts. She has a new album “Under Moving Skies” which follows up her much heralded 2015 debut “Spirit Of Oberlin.”

There`s a contemplative feel to the opener `More Time` with its lyrics of ‘I always thought we’d have more time’ a tale possibly of losing somebody close. A song for these difficult times maybe. This dreamy number has that ability to get into your subconscious and have you singing it for the rest of the day. A fairly upbeat sentiment which has the sound of church bells at the end. The soulful `Don’t Let Me Sleep` was quite country tinged at times. A tune that had me absorbed in a dream like state. We also get to enjoy a guitar solo mid-song from Undertones legend Damian O’Neill. The song is seemingly written about not wanting to sleep after receiving some disturbing news and you can almost feel the angst in Eileen`s vocal delivery.
The melancholic but wonderfully melodic `Echo` is a suitably bare-boned striped back, warts, and all reflection on a troubled relationship. Again. Damian O’Neill is there to provide lead guitar and Cathal Coughlan (Microdisney / Fatima Mansions) is on hand to add his deep sympathetic and compassionate vocal backing. We have a mid-paced piece with `I Don’t Mind` which seems to be an acceptance of what life has to offer with a pleasant guitar break midway through adding to its uplifting appeal.

`Sweet Alice` had a gentle hippy trippy essence about it. The flute inflections supplied by Terry Edwards (The Higsons) and gently tapped bongo from Paul Byrne are a stroke of genius and a delight to hear. Once more Cathal Coughlan adds enriching harmonies. It was an amusing choice to tag the next song `Malibu Stacy`. She maybe the name of Lisa’s Barbie doll in The Simpsons but the song was written about the half-dressed adolescent females seen desperately, hanging around, anticipating the opening of late bars and night clubs. There`s a wonderful infectious strut, a sort of optimistic bubble gum pop feel about it musically and vocally.

We get a slight curve ball with `Friday Tune` which is an instrumental, written and performed by Damian O`Neill on mandolin, vibes, and acoustic guitar. A captivating tune that had me in mind of something The Divine Comedy would produce. I really enjoyed the strangely named `Yes, Music Does Have The Right To Children. ` Although it was gilded throughout with mesmerising bouzouki inflections supplied by Niall O`Sullivan, I felt it was very much a slice of Americana. The repeated chorus of “you can never go home but you`ll always go back” hinted at some past misdemeanour.

The penultimate track `San Fran 1997` is a haunting, emotionally expressive reflection on an untroubled time when the narrator lived in Northern California and times shared such as dancing to bands such as The Red House Paintings and Pavement. These memories are warmly evoked with the benefit of Sean O’Hagan (Microdisney / The High Llamas) on acoustic guitar and organ, along with Stephen Ryan (The Stars Of Heaven / The Revenants / The Drays) on electric guitar and backing vocals. The album concludes with `Celebration` for which the singer has produced a haunting aura to an a cappella version of Lancashire-born Irish poet Nuala Ni Dhomhnaill`s poem. It seems to relate to observations of everyday life and the delivery of the poem is very moving especially in Eileen`s sumptuous Irish dialect.

I really enjoyed “Under Moving Skies” and found there was a wealth of variety to keep my attention engrossed throughout. The songs are well-written, with lyrics that are measured, informed and thoughtful and Eileen has a rich and wide-ranging vocal range. If I were pushed to make comparisons, I’d say that I was reminded of Natalie Merchant, Mary Black, and Eleanor McEvoy at different times. There is almost a tsunami of Dublin based artists gaining significant media attention at the moment with Fontaines D.C., Murder Capital, Thumper, Girl Band, and Inhaler amongst them. I only hope that Eileen Gogan is swept along on this tidal wave of talent. It would only be what she truly deserved.