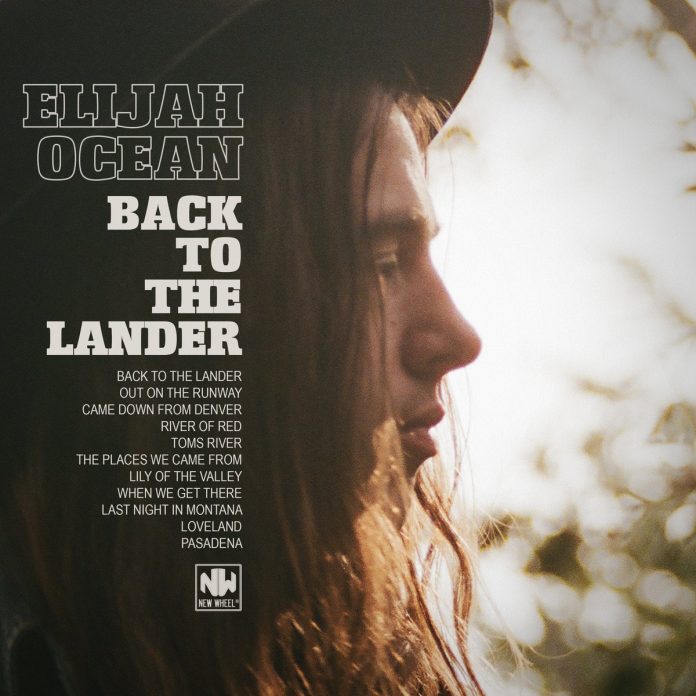 There are people, who when you see their picture, you instantly know that they were born to play music.

Generally speaking – although not always – they are “roots” rockers.

I am talking about people like Frankie Lee, Sam Morrow or Arkansas Dave. The type of chap that you can imagine playing a battered old acoustic in their playpen and not with their teddy’s.

Elijah Ocean has more than a similar sound to at least two of those guys (he maybe isn’t as “rock” as Morrow) but there’s that vibe too.

The thought that he is driven to create this music, drive these roads, to perform. It’s absolutely all over “Back To The Lander”.

Released in the US late last year, “….Lander” is been given a European slot now, and the key point about this is written in the words that came with the email.

“Captured in his parents barn,” it says, before adding: “ and on the road” and there is a real sense that these are his chronicles, and if not his diaries, then most certainly his document of where he is right now.

The title track is timeless storytelling in the great tradition. Laid back, kind of 60s vibes swirl around this country sound, and Stetsons off too, for managing to rhyme “Datsun” with “Doc Watson” – and there is something of the playing of the latter here too, not to mention some brilliant harmonica.

“Out On The Runway” is one of many that is built around some absolutely wonderful Lap Steel and I am not going to be alone in thinking of The Allman Brothers when this one kicks in. But for all brilliance of the music, there’s true joy in the lyrics. “Memories on every street, in a city that was never home” sings Ocean, and that really is an example of the wonderfully evocative words throughout.

This really is the whole package, though. The song is the all important thing. “Came Down From Denver” is catchy as you like, and even the darker ones, like “River Of Red”, which deals with depression in the most matter of fact way, you can sing along to.

“Tom’s River” is a story worthy of the Drive By Truckers – and you best believe that praise doesn’t go any higher in this type of music. That would be the album highlight too, if “The Places We Came From” didn’t exist. “They say some things never change,” he muses, “but I can name a thousand things that did” and in so doing, he might be describing the sound.

Everything from the aforementioned DBT to Steve Earle or whoever you want to name is here, but somehow Ocean finds a fresh angle to it all.

Like “Lilly Of The Valley” which is just shot through with something….lovely….a real sunshine, which is at odds with the words, but that’s the skill. That one is more folk, but “When We Get There” is a simple love song, and “Last Night In Montana” (rhymed with “bandana” for extra points) has a touch of early Dylan about it, and the acoustic picking of “Loveland” is weatherworn, weatherbeaten and belonging on the dirt roads.

And if it ends on a more downcast moment, with the character who is incarcerated longing for his lost love in “Pasadena”, then that’s only because life on the road, the existence of the troubadour, it’s tough.

The only surprise on “Back To The Lander” Is that Elijah Ocean has five full-length records. Whether I should’ve known this is another matter, but if like me, you hadn’t come across him, then you are missing a rare talent. Quite simply, rootsy, country rock n roll from the heart as much as it is from the heartland does not get better.