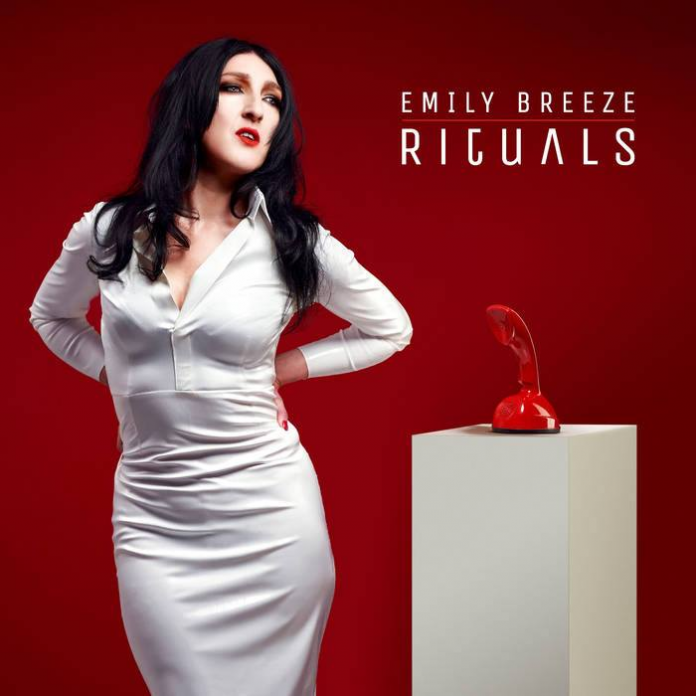 A cult heroine of Bristol’s underground music scene Emily Breeze is the former frontwoman of Psychedelic Post-Punk outfit Candy Darling. Emily has a new band and a new album called “Rituals” and it`s a pretty intense affair. Her influence ranges from Vintage Exotica, Father John Misty, Pulp, David Lynch soundtracks and all the glorious trash and terror of 21st century life. Her great uncle was legendary Irish rebel, writer (and drinker) Brendan Behan so her gift for storytelling might well be hereditary. Indeed, nonother than The Sunday Times labelled her “the lovechild of P.J Harvey and Johnny Cash”

`Call In Sick Today` introduces the album with just a distant strummed guitar before the husky vocals appear and the bass, drums and synth give the song a real unnerving intensity.

There is a real hypnotic start to `Work` which builds up to a more mid paced offering, in which the music allows a platform for the rich vocals and lyrics.

Lead single “Limousines” combines sharp lyrics and haunting melodies The song opens with an Elizabeth Taylor quote. “Put on some lipstick, pour yourself a drink and pull yourself together”. Emily explains. “The song is an affectionately mocking love letter to a young drama queen from the perspective of ageing female sexuality. Older women’s voices are frequently written out of the Rock narrative and this is something I intend to challenge”. An epic song if ever there was one.

The next offering `New Fresh Old Bones` is a very cinematic affair and wouldn`t feel out of place in the American horror drama Twin Peaks. We have a cover of the Buddy Holly hit `Raining In My Heart` and it`s quite an austere and disconcerting version but at the same time thoroughly compelling.

There are some wonderfully echoing guitars and some crazy synth inflections on `Heaven`s Gate`. A song written about or maybe from the perspective of Marshall Applewhite the leader of the Heaven’s Gate cult also known as Do. He convinced his followers to partake in a mass suicide in 1997 claiming the lives of thirty-nine people. The chorus of “Drink the Kool aid” in the latter part of the song was sadly quite persuasive, amusing but also rather disturbing.

`Ego Death` was a song that I truly loved. It has a tinkling piano with an underlying entrancing bass and drum modulation with Breeze`s evocative spoken word and sung lyrics throughout. The lyrics speak of an Imaginary abscondment from a routine, unexciting occupation. There were also some delightful occasional guitar outbursts throughout the piece adding to the overall feel of hopelessness.

The penultimate track `Book Of Longing` is simple but very effective. The music is almost there as a podium for Ms Breeze`s poignant vocals and abstract lyrics.

The record closes with `Love Song For Aileen Wuornos` Wuornos was an American serial killer who murdered seven men in Florida and was subsequently executed after eleven years on death row. The men were killed to please Wuornos`s girlfriend. Although the subject is pretty disturbing, I couldn’t help but enjoy this enormously. A totally disturbing guilty pleasure.

I thoroughly enjoyed this album. Ms Breeze has surrounded herself with some really talented musicians with Rob Norbury (guitar), Andy Sutor (drums) Duncan Fleming (organ) and Graham Dalziel (bass). I can understand now why this lounge-noir chanteuse is one of Bristol`s best kept secrets and has been referred to as Nancy Sinatra on ketamine. She has such a seductive voice and doesn`t shy away from difficult or disturbing subject matter in her lyrics. A captivating and compelling artist who I felt drawn to like a moth to a flame.