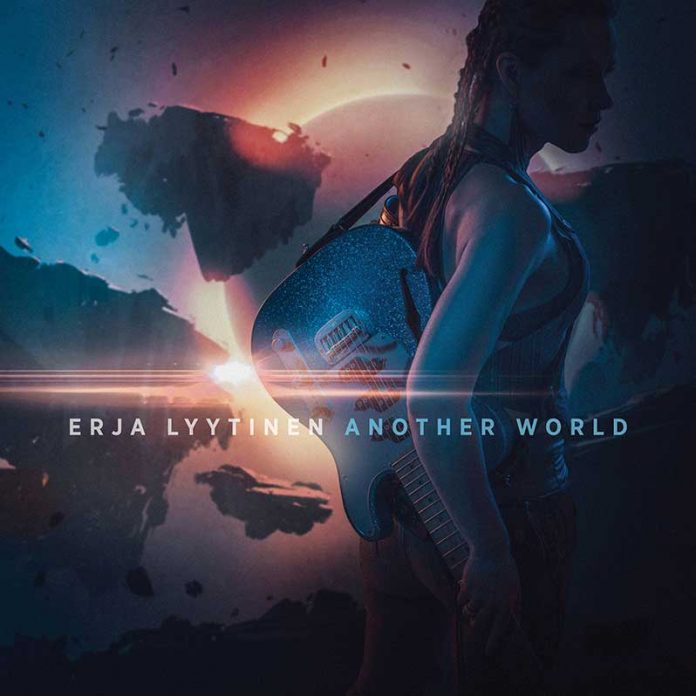 This is, in many ways, the musical equivalent of watching the film after you’ve read the book.

I saw Erja Lyytinen play live the other week, and most of the songs that form “Another World” were aired during the course of the set, so you already had your ideas as to the feel and direction of the record. In the same way you do when reading the words on the page, before taking in the adaptation. In some cases it is as you imagined, perhaps, but in others you are mistaken. So it is here.

What is undoubtedly  a fact with these songs (eight on the record and a bonus), is that Lyytinen fancied taking her music into different waters.

A couple of years ago she released the “Stolen Hearts” album. It was her “break-up” record, if you will. “Another World” in many ways can be viewed as her escape from the heartbreak.

It actually starts in pretty conventional blues fashion. Erja is joined by Michael Jackson’s guitar player Jennifer Batten for “Snake In The Grass” – which in Lyytinen’s words becomes a “bit of a guitar battle.”

It certainly sounds like it was fun to play, but that’s true too, for much of it. “Cherry Overdrive” for example sounds downright sultry. The car is often used as a metaphor for other things – that has been the case since rock first rolled – and whatever is on her mind here doesn’t sound like it necessarily has four wheels. “If you can’t take the heat, get off the leather seat” she almost whispers here.

The title track is crucial here. Expertly played – the organ work from Harri Taittonen is perfect – but the feel of the song is more prog, perhaps, than blues. The solo is mighty, but it is a very different sound than you might be used to.

Noticeably, Lyytinen produces this herself, as if to emphasise that she had a very clear vision as to where the flight should land, and “Hard As Stone” has a touch of Latin flavour about it, a nod to her recent appearance with Carlos Satana. It is laid back and sounds contented, even if the lyrics reflect a little more inner torment.

“Wedding Day” – just as much as the title track – might hold the key to this. About a woman who cancels the nuptials after finding her boyfriend was cheating on her, it not only resolutely believes its his loss, it has some magnificent Sonny Landreth slide guitar. He meshes with the eponymous star brilliantly here.

Songs don’t get more heartfelt, though, than “Miracle”. Inspired by the birth of her twins, it is a beautiful song, maybe the best on the record in truth. A thing of slow-burning class.

“Torn” is a thing of stoicism. Those that were hoping for a Natalie Imbruglia cover (not me, you understand….) miss out, although this is more of a pop song than many.

Like many matters of the heart, though, its all very well being stoic, but sometimes you want a good cry. “Break My Heart Gently” provides that. Over a more folk soundscape, however. This is the sort of thing that you could imagine on a Mark Knopfler record, say.

The bonus track, “Without You” ramps up the soul, and gives a clue, perhaps that this reinvention of Erja Lyytinen is nowhere near complete yet.

If this isn’t – as another Scandinavian band put it  years ago – the Final Countdown, then “Another World” is certainly lift off, and an entertaining journey too.