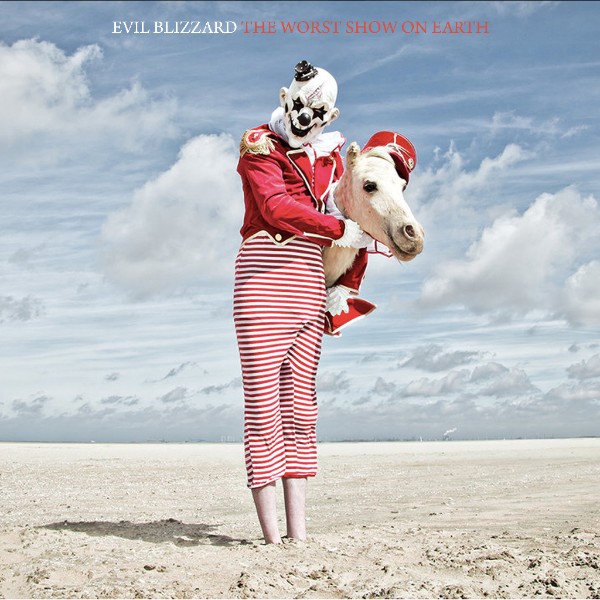 A tinkling piano and some distant chanting is the unnerving opening to the first track `Hello` This is just before the drums and a wonderful bass line / lines are laid down and the questionable statement of `Who are we, We are we, Who are you, You are you” is shared disconcertingly before the tune builds and throws up a bellowed “Hello…….” over the crescendo of noise that constitutes the chorus. Phew. Welcome to the wacky, weird, worrying but wonderful world of Evil Blizzard and their third album release `The Worst Show On Earth`

This is a band that it is fair to say have caused a stir since their debut album five years ago. They were on the front cover of The Guardian and championed by the much missed, Mark E Smith, who gave the band the money to record their debut album out of his own pocket. If you have never heard or seen them, let me explain, they comprise a drummer vocalist, a keyboard player guitarist and four bass players, yes four bass players. The band also wear rubber masks a la Texas Chainsaw Massacre and have been compared to a sort of Victorian freak show. “The Worst Show On Earth” is the band`s third album and is released on their own newly-founded Crackedankles Records having been produced by Richard McNamara from Embrace. This release not only encompasses the backbone of the four basses, but also, piano, cello, samples and a general disregard for the basic concept of a ‘pop song’ with two of the tracks hitting the ten-minute mark and has advanced their sound to incorporate techno and industrial elements,

When I was fortunate enough to witness their live show, they previewed the track `Fast Forward Rewind` and it was introduced as a disco inspired tune that you can dance to. I can`t remember too many bobbing about but it has a wonderful churning bass line, thumping drum beat, and the title words being subliminally chanted throughout, with some superb piano inflections. Magic. The drumming is almost tribal on `Unleash the Misery` with again almost concealed messages to set free the unhappiness before we enjoy an all-out musical assault. `Those We Left Behind` has some abstract nice intricate shades before taking more of a straight rock out two thirds of the way through. I felt myself tripping out in a pleasant way during this sublime offering.

Again `Like A God` has cracking sonic grooves and intangible channels that had me nodding along with the almost hypnotic furrows of this piece. At just under three minutes, `Tell Me` is a head down, no nonsense skull thumping boogie, it starts as if it’s about to explode before settling down at a pace with the slightly menacing statement come interrogation of “tell me what you want” running throughout the song. The final two tracks `Pull God From the Sky` and title track `The Worst Show On Earth` clock in at nigh on ten minutes a piece. The former builds from very a quiet unassuming introduction to a real psychedelic journey that had me almost floating away with this mesmerising almost trance like ride. It was akin to a really nice warm blanket on a cold night in front of the fire, it gave me a really satisfying glow inside and out. The latter offering, the album title track features the spoken word of German artist Arne Wald, with whom the band have collaborated in the past on visuals. It opens quietly, slightly distracted, distanced then mid-way through a more upfront controlled phase, akin to a statement of intent is shared, which sets up a superb platform for the eerie Germanic utterings that only enhance this breath-taking ending.

These Preston natives, who have famously only ever rehearsed five times comprise of Side (drums, vocals and percussion), Filthydirty (bass, guitar, vocals, keyboards and sequencing), Prowler (bass), Kav (bass and guitar), Stomper (bass) and Blizzpig (keyboards, glamour and corruption). They have described their sound as blending Psyche, Krautrock, Post Punk and an unmistakable image of butter pies being baked or trying to imitate the crashing of the cotton mills at dawn. This release goes someway to demonstrating this with their sonic grooves and unrelenting weirdness, that at times was wonderfully repetitive and delightfully hypnotic.

I have so say I adored this album and god knows how many times I’ve played it. If I had to pigeon hole the sound I’d say a mix of Black Sabbath, Public Image Limited, Killing Joke, Hawkwind and The Fall. The band deliver sinister psychedelic rock that will melt your mind and soul. I shouldn`t encourage criminal activity but buy or steal this album, it will take over your life. This is a submission that you should file under ‘Uneasy Listening’

You have been warned.