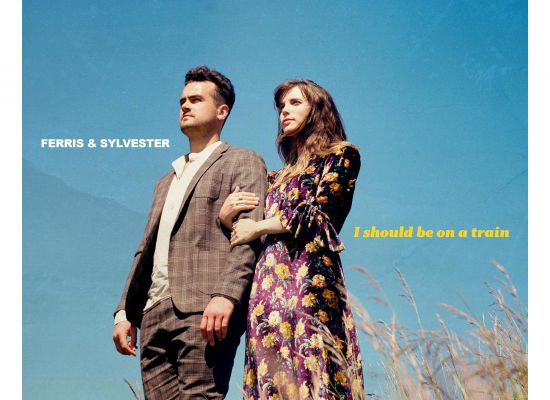 In the last couple of years there has been an upsurge in interest in Americana and London duo Ferris & Sylvester, Issy Ferris and Archie Sylvester have been at the forefront of this. They have released two EP`s “The Yellow Line” and ‘Made In Streatham’ and a number of well received singles. They have an album due but like so many other artists the coronavirus (COVID-19) has had its consequences. If there is a positive outcome, it`s that the duo have been inspired to write a couple of tracks and now release them on a five track EP entitled “I Should Be On A Train”

The title track `I Should Be On A Train` begins as a laid back very melodic offering with just Issy`s voice and an acoustic guitar before Archie joins in and it takes a more gospel like edge before again returning back and forth giving the feeling of frustration at the restrictions that we are all under. There`s a dreamier sixties vibe with some quite psychedelic tinges to `Knock You Down.` An ethereal offering that seems to reminisce about times gone by with a hypnotic strap line of “Don`t let the system knock you down”

`Everyone Is Home` is a euphonic ballad written about the effects people are experiencing during the pandemic lockdown with a simple but telling message of “everyone is lonely, everyone is home” The song was written at the pair`s home studio and has a tom-tom drum beating throughout and some fairly restrained guitar shredding and blistering organ tinges.

The hopeful message in the last line was recorded outside and you can hear the birdsong in the background. A real “isolation anthem”. There`s more of a rock out with `Good Man` with thumping drums and electric guitar riffs at the heart. Two thirds of the way through there was a break and the inclusion of a sitar which gave it an interesting feel and a possible hint to the influence of the late Ravi Shankar.

I have to admit I rarely like covers and especially covers of the Beatles. So `With A Little Help from My Friends` was a brave move after all Joe Cocker seems to own it. But it was an obvious choice as to its lyrical sentiment during these difficult days and was a pretty faithful version.

I have to admit I really like Ferris & Sylvester and they can`t do too much wrong in my opinion. I`ve managed to see them live and they can deliver. I`m really looking forward to their forthcoming album but was delighted to see that they have used their “down time” in a positive manner. This Extended Play will go some way to filling the gap prior to the main course.