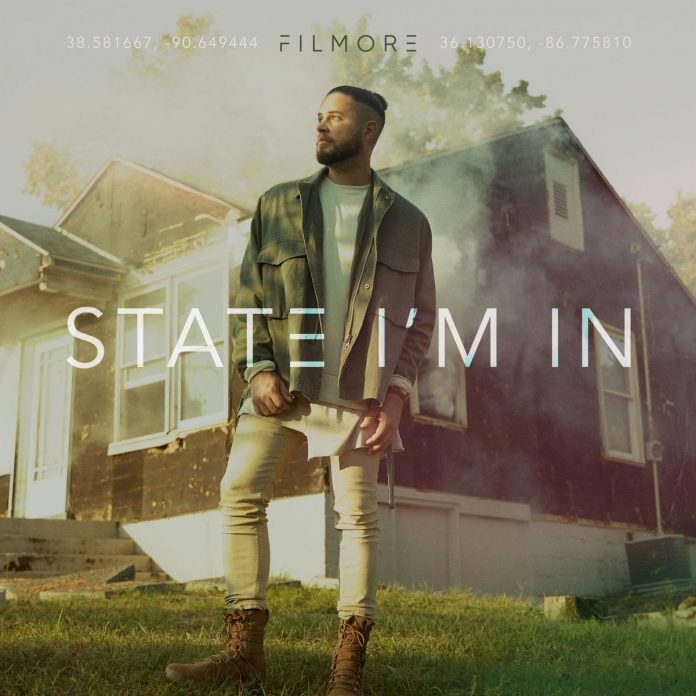 It’s interesting to read some of the streaming numbers that Tyler Filmore has gained on his singles to date. 26 million on one, 21 million on another – and I know that probably means with the Spotify rates the way they are that he’s made about £12, but that’s not my point here. Rather, it means that this debut album is already in a place where expectations are high.

It’s interesting, though, that in that aforementioned streaming age, Filmore, from Missouri, but writing in Nashville, has turned up with a record with 18 songs on. Clocking in at less than an hour, yes, but still, 18 songs is brave in 2020.

Yet, “State I’m In” is a pretty cohesive journey, it feels very much like its Filmore’s journey to this point.

It is overtly pop music, rather than country music, but from “New To This” and its solo that sounds like a million dollars, and R & B flavours, it seems to be very much Filmore’s authentic voice.

“Slower” (the 26m one) is easy to see on the radio everywhere, and even “Country Song” has very little to do with Hank Williams or George Jones. I’d argue though, that’s kind of the point. “My heart beats to a country song” he sings here. That doesn’t mean though, that the sound does too.

There’s elements here, like on the wailing guitars of “W.I.L.D” its just that the overall vibe is more modern, electronic, like on the title track, and in the pulsing drums of the R and B ballad “Heart’s Having A Hard Time”.

He co-writes all these songs, and it would be interesting to hear Filmore’s demos, and to see the likes of “Blue Skies” in their raw form, rather than the polished format, but he’s a natural. That’s for sure. “Nothing’s Better” is a funky anthem to the just dumped (20 million streams right there, no bother) and even when he’s more reflective, like on “Busy” he can’t help but sound like a gold record in waiting.

Nothing lets itself go, too much. “My Place” wants a party, and even though it might not be too wholesome, they leave that your imagination, “Other Girl” is beautiful (he got engaged last year, so you can be sure it is from the heart) and the massive sounding “Pictures On The Fridge” is its counterbalance.

In truth it’s a little one paced, but its pointless to criticise seeing as its clearly achieved all the aims it had for the record, and whatever it does, like “Me Lately”, or “Day, Hour Minute” or any other, all have a genuine class.

“London” – slightly more stripped down – is perhaps the best, and shows that Filmore is a real songwriter, that said, the record benefits from its happier moments, like “Livin’ Easy”, while “Anyone But Me” with its fragile feel is impressive too.

In an interview around the record Filmore said this: “”I wrote every song from a real and personal place with amazing writers and friends. My hope is that you can listen to this album from start to finish and know who Filmore is by the end.” And that’s a point you can’t argue, really, because its so obviously right. As is this: with “The State I’m In” a new star is born.