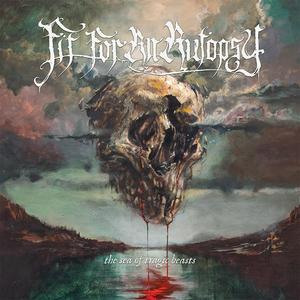 US deathcore/post-rock originals continue the upward trajectory of their recent releases on genre-defining album number five.

Once this album was in the can I visualise the band sitting down with a beer and saying nothing.  Just giving each other a nod of recognition that what they have just produced is something of genuine high quality that perhaps even they themselves did not anticipate. Their hordes of fans always knew that it was just a matter of time before all the pieces fell into place and the band have delivered in spades.

The album opener is the forceful and groove-soaked title track “The Sea of Tragic Beasts” and it gives you nothing less than a clear aural path to the road, or should that be sea, these six-piece New Jersey natives are travelling on.

“No Man Is Without Fear” follows like a raging pitbull chasing a bear across field of fire. It’s relentless power and accuracy mark it as a standout track on an album full of high class modern heavy and uncompromising music.  Track number three “Shepherd” does little to dissuade you otherwise with the pace increased and structured shifts a-plenty.

The album has moments of beautiful brutality layered in amongst gargantuan riffs and pummeling drum beats.  This album is the boat in the sea of tragic beasts that has the very brief moments of alarming clarity in the oceanic maelstrom of musical waves and storms.

Vocalist Joe Badolato imposing tones are utilized to the maximum here and it strengthens the musicianship of his bandmates to great effect, never more so that on the riff-laden “Mourn”.

The more post-rock stylings of the band come into play a little more on tracks halfway through the album like “Mirrors” and “Unloved”.  Both tracks show an understanding of building tension and atmosphere at the beginning of a track and show that even when slowed down the band lose nothing of their raw intensity.

Closer “Napalm Dreams” suitably ends the album on an upliftingly bleak note and re-affirms how far this band have come and displays what now sets them apart from the rest.

The Sea…. takes the best elements of their last two releases, Absolute Hope Absolute Hell and The Great Collapse, and combines it into their most complete album to date.  11 years since their formation has seen a steady growth in quality and controlled energy that has now matured into something very special indeed.

The Sea of Tragic Beasts is out now through Nuclear Blast.